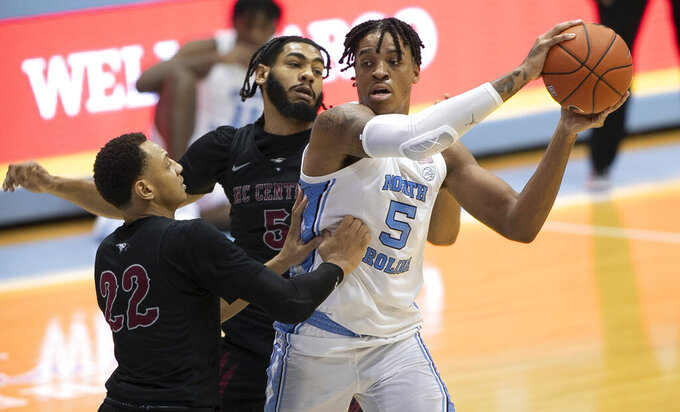 CHAPEL HILL, N.C. (AP) — Armando Bacot carried North Carolina in the first half. Then Andrew Platek stepped up for the Tar Heels.

Bacot had 19 points and 11 rebounds, and No. 16 North Carolina stopped a two-game slide by holding off North Carolina Central for a 73-67 victory Saturday.

Caleb Love and Day’Ron Sharpe scored 12 points apiece for the Tar Heels (4-2), and Platek finished with 11.

“Just trying to do the same thing every game and just knowing what my role needs to be,” said Bacot, a sophomore forward. “Platek made a couple of big shots. ... That made it easier for us to get the high-low passes and get the ball in the paint.”

N.C. Central (1-3) scored the final nine points of the game. C.J. Keyser had 19 points for the Eagles, and Justin Whatley finished with 13.

The Tar Heels missed their first 10 3-point attempts before Platek connected from the right wing on consecutive possessions for a 55-42 lead. The reserve guard then added a fast-break layup off a steal, giving him eight points in 75 seconds.

“I’m not scared to shoot the ball,” Platek said. “I just want to take good shots.”

North Carolina scored the final 10 points of the first half for a 30-28 lead, holding the Eagles scoreless for the last five minutes.

Bacot had 15 first-half points. He was 6 for 7 from the field for the game.

“The first half, he was the only offense,” coach Roy Williams said.

“We’re confident. We believe in ourselves,” N.C. Central coach LeVelle Moton said. “We expected to win the basketball game.”

The game was added to the schedule in the middle of the week. North Carolina had an opening after a matchup with Elon was shelved when Elon’s program went on a coronavirus-related pause. N.C. Central had played only once since Nov. 26, with three games canceled.

“It’s all organized chaos at this point,” Moton said. “I told our team we have to find comfort in discomfort.”

The Tar Heels have trailed by double digits in the first half in four of their games.

“Our effort was terrible,” Platek said. “We were not coming in with enough energy. We have to change that.”

The Eagles knew defending North Carolina’s post players would be a challenging task. When fouls began to rack up, that created issues at both ends of the court for N.C. Central.

Moton said that was certainly clear in his team's disjointed offense in the final few minutes of the first half.

“It kind of looked like sandlot basketball,” Moton said. “It kind of cost us.”

N.C. Central: The Eagles have faced more than one nationally ranked team for the first time since the 2014-15 season. They opened the season with a loss at Iowa, where the Tar Heels fell on Tuesday night.

North Carolina: The Tar Heels’ perimeter shooting has been under scrutiny after only one 3-point basket in the Maui Invitational final vs. Texas. Now in two home games, North Carolina is a combined 4 for 18 on 3s and every opponent has outscored the Tar Heels from beyond the arc. Platek had the only 3-pointers for North Carolina on Saturday.

North Carolina: Next Saturday vs. Ohio State in Cleveland in its final scheduled nonconference game.