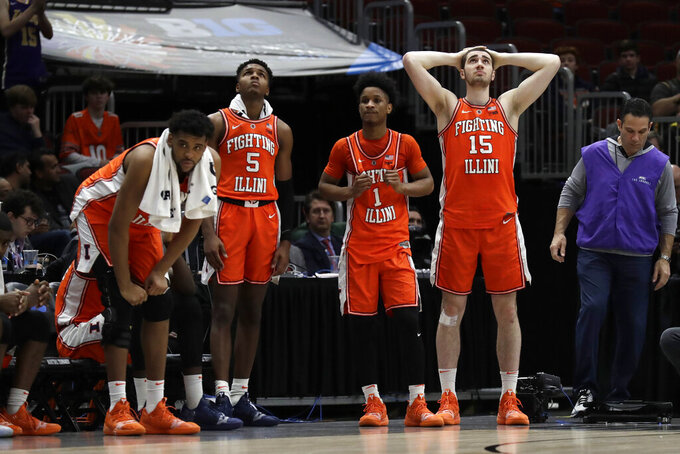 Illinois's Adonis De La Rosa (12), Tevian Jones (5), Trent Frazier (1) and Giorgi Bezhanishvili (15) react on the bench during the second half of an NCAA college basketball game against the Iowa in the second round of the Big Ten Conference tournament, Thursday, March 14, 2019, in Chicago. Iowa won 83-62. (AP Photo/Nam Y. Huh) 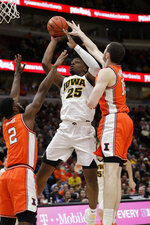 CHICAGO (AP) — Nicholas Baer got hot from outside. Jordan Bohannon and Tyler Cook hooked up for a memorable slam, and Joe Wieskamp contributed a couple of nice plays.

Iowa stopped its four-game slide with one solid all-around performance.

Baer made a career-high five of Iowa's 12 3-pointers and scored 17 points, helping the Hawkeyes pull away from Illinois for an 83-62 victory on Thursday in the second round of the Big Ten Tournament.

"It's really big for our team when we all play aggressively and I think that's what I did tonight," Baer said. "That's when we're playing our best basketball."

Iowa (22-10) turned up its play in the second half to hand coach Fran McCaffery his first win since he returned Sunday after a two-game suspension for berating an official. The Hawkeyes went 12 for 23 from beyond the arc and turned 15 Illini turnovers into 24 points.

It was a similar performance to their meeting in the regular season, when Iowa shot a Carver-Hawkeye Arena-record 68 percent from the field in a 95-71 victory over Illinois on Jan. 20.

"They're just a smart team," said Giorgi Bezhanishvili, who led Illinois with 12 points. "When you make a mistake they make you pay every time."

Next up for Iowa is No. 10 Michigan on Friday night. The Hawkeyes held the Wolverines to 32 percent shooting in a 74-59 win on Feb. 1 in their only meeting of the season.

Iowa grabbed control by ripping off 23 of 28 points during the decisive stretch in the second half. Baer made three of the Hawkeyes' six 3s during the run, and Luka Garza connected from long range to make it 71-47 with 7:48 left.

"We know when we play like that we're hard to beat," Cook said.

While Baer took aim from long range, Cook had the biggest highlight of the game when he reached back to slam home Bohannon's perfectly placed pass on an inbounds play early in the second half.

"We ran it to perfection," Bohannon said. "It definitely adds another spark to the game. We kind of broke out a run after that and there was no turning back."

Wieskamp scored 13 points for Iowa, and Cook finished with 12. Connor McCaffery had eight of the Hawkeyes' 25 assists on 31 baskets.

The Illini shot 52 percent from the field and placed four players in double figures, but couldn't keep up defensively. Trent Frazier and Tevian Jones each scored 11 points, and Ayo Dosunmu finished with 10.

"We turned it over too many times," coach Brad Underwood said.

Illinois: Bezhanishvili, Dosunmu and Jones are freshmen, and Frazier just completed his sophomore year. So there is reason to believe the Illini could make a jump next year under Underwood.

Iowa: Baer and company are going to be tough to beat if they continue to shoot well. They were 18 for 32 from the field in the second half.

Illinois' season is over.

Iowa looks to strengthen its resume for the NCAA Tournament with another victory over the Wolverines.