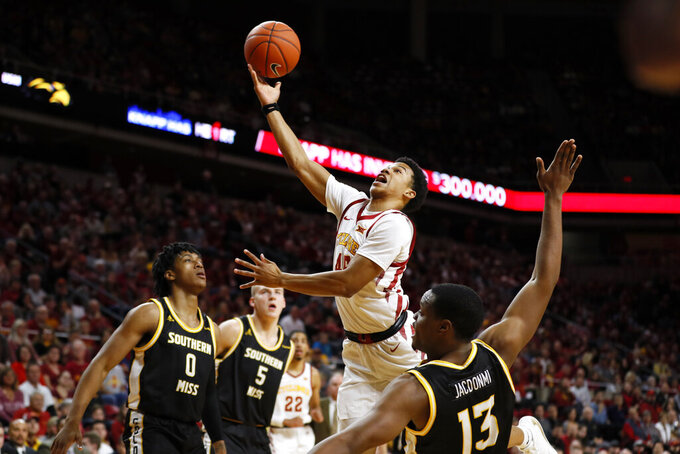 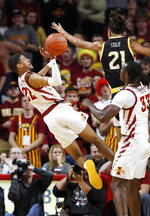 AMES, Iowa (AP) — Despite some continued struggles from 3-point range, Iowa State had no trouble blowing past Southern Miss.

The stakes get much higher next week, starting in eight days against Michigan in the Bahamas.

Tyrese Haliburton had 12 points with nine assists and three steals for the Cyclones (3-1), who used a 15-2 run to close the first half as they pulled away.

But things won’t be so easy at the upcoming Battle 4 Atlantis tournament. After facing the Wolverines, Iowa State will get either Alabama or North Carolina the following day, followed by an undetermined opponent next Friday.

“It was ugly games at times. It was a physical game at times. I’m proud of the way we closed the first half,” Iowa State coach Steve Prohm said. “Some things we’ve got to get better at from an offensive standpoint...it’s early, we’ve got to continue to grow. We’ve got a great test ahead of us next week with Michigan and a host of really good teams.”

After a sluggish start, Iowa State held the Golden Eagles scoreless for nearly five minutes in building a 33-20 halftime lead. The Cyclones then reeled off 11 points in a row to make it a 60-34 game midway through the second half.

Iowa State once again struggled from beyond the arc though. After going just 3 of 25 in a win over Northern Illinois its last time out, Iowa State was 5 of 22 against the Eagles.

George Conditt had nine points, six rebounds and four blocks off the bench for the Cyclones.

Boban Jacdonmi scored 10 points for the Golden Eagles (1-3). Southern Miss went 0 of 16 from the 3-point line and didn’t shoot its first free throw until there was 2:47 left.

Southern Miss: First-year coach Jay Ladner substituted his entire starting five less than two minutes into the second half. That’s not the move of a coach happy with his team.

Iowa State: The Cyclones’ have shown the ability to get buckets inside and from mid-range though. Iowa State scored 28 points in the paint and was 18 of 30 on 2s. Iowa State also forced 16 turnovers. “We’re at our best when we’re moving the basketball,” Haliburton said. “Consistency, we’re not there where we need to be right now.”

Iowa State’s Rasir Bolton was just 2 of 8 from the field for eight points. But the Cyclones were plus-23 when he was on the floor, the best showing on the team. ...Iowa State was outrebounded on the offensive glass 13-7. ...Gabe Watson was 1 of 14 shooting for the Eagles. ...The Cyclones shot 22 of 30 from the line. ...Iowa State scored 17 points off of turnovers and didn’t allow a fast-break point.

“It’s game four. They’ll fall,” Nixon said about the team’s struggles from beyond the arc.

Iowa State plays Michigan in the Battle 4 Atlantis tournament in the Bahamas on Nov. 27