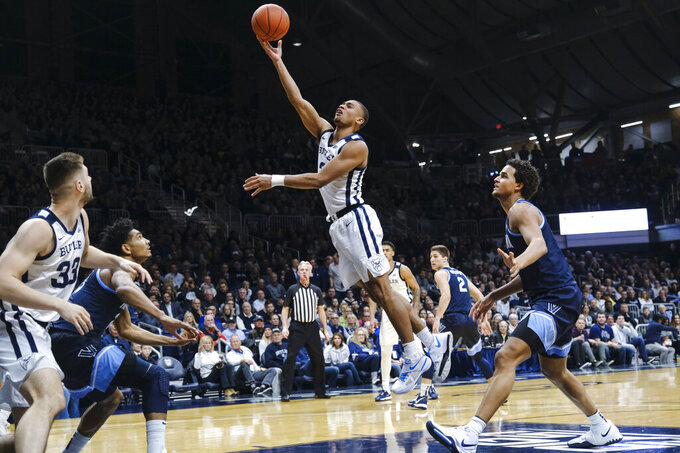 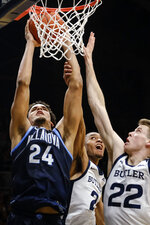 Instead, he just kept dribbling calmly, confident he would make the right play.

So when he caught Collin Gillespie leaning to cut off an expected drive, Baldwin hopped outside and knocked down a buzzer-beating 3-pointer to give No. 19 Butler a 79-76 victory over No. 10 Villanova.

"He gave me space, so I took it," Baldwin said. "When I drove it, he kind of backed up so I just went to my stepback."

Baldwin, who was 5 of 15 from the field, claimed he knew it was good as soon as the ball left his hand.

Coach LaVall Jordan was counting on it after opting not to call a timeout when the Wildcats tied the score on Saddiq Bey's 3 with 24 seconds to go.

So, with Baldwin in control of the ball, Jordan let it play out and his top scorer timed the play so perfectly the referees needed a replay review to confirm the shot got off in time and to make sure Villanova wouldn't get the ball back.

Baldwin finished with 17 points, eight rebounds, three 3-pointers and only one turnover in a little less than 38 minutes on a night the game was delayed for about 15 minutes when water started dripping from the Hinkle Fieldhouse roof.

“That's tough," Gillespie said after scoring 28 points. “I was just trying to get back and he hit a tough shot at the end."

Baldwin's final shot ruined Villanova's final flurry. The Wildcats (17-5, 7-3) trailed by 10 with less than six minutes to play, but slowly and steadily cut into Butler's lead.

Sean McDermott, who had 21 points, drew a foul on Butler's next possession and made both free throws. Then, Bey scored the last of his 29 points to tie it at 76.

From there, the ball went to Baldwin, who only let it go when he took the shot.

“It's great, not for me personally but all the energy and all the hard work we put in out there," Baldwin said. “To celebrate afterward is great."

Villanova: The Wildcats defense is not playing well and it has led to them losing consecutive games for the first time this season. After giving up 76 points in Saturday's loss to Creighton, their highest point total since Nov. 24, they allowed Butler to do it again. Villanova certainly packs some scoring punch, but it could be a short postseason if the defense doesn't play better than it did against the Bulldogs.

Butler: Aaron Thompson's return from an injured left wrist certainly made a difference. He scored nine points, managed to get Butler's offense back in sync. The bigger contribution may have come on defense, where his presence solidified the rotation. Butler is clearly a better team with Thompson on the court.

The leak forced a stoppage with 13:02 left in the first half.

Butler sent two maintenance workers up to the catwalk, trying to find a solution that would allow play to resume. They found that the water was coming from a beam, dried the area and moved a bucket they found to prevent any more water from raining down.

Butler: McDermott had eight rebounds while Golden had five. ... Bryce Nze added 12 points and five rebounds. ... The Bulldogs had their highest scoring first half since a 44-point effort against Wofford on Nov. 16. ... Butler finished 6 of 13 from beyond the arc after making just one 3-pointer in Saturday's loss, their lowest total since December 2014. ... Baldwin passed A.J. Graves for sixth on the school's career scoring list and now has 1,821 points.

Villanova: Hosts No. 12 Seton Hall on Saturday, seeking an 18th consecutive home win in the series.

Butler: Hits the road Sunday to take on Marquette.