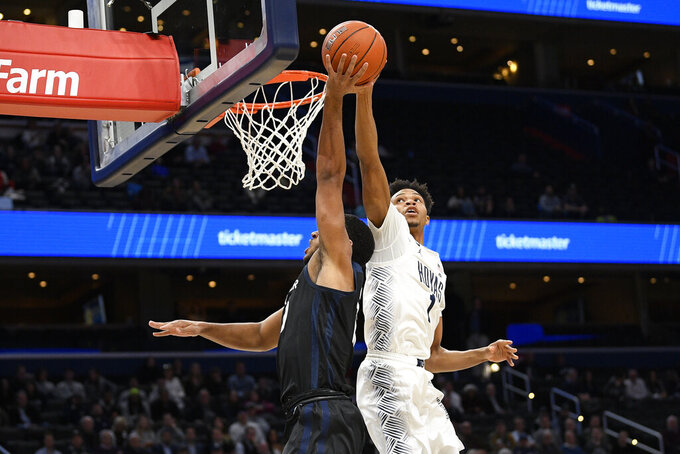 WASHINGTON (AP) — Kamar Baldwin found some more second-half magic and another way to lead a comeback.

He scored 12 of his 13 points after halftime to help No. 16 Butler erase a double-digit deficit and beat Georgetown 69-64 Tuesday night.

Baldwin didn't quite go off like Friday against Marquette, but Butler's leading scorer took over the game in facilitating fashion after being held to one point in the first half.

“They just do a great job, and then the second half, I just kind of pick and choose my spots,” Baldwin said. “Just reading defenses and seeing where I can get to my spots.”

Baldwin is no stranger to heating up later in games. After Marquette limited him to two points in the first half, he scored 29 in the second and overtime to end the Bulldogs' skid.

This time, with Georgetown double-teaming him and focused on shutting him down, Baldwin found open teammates and dished out four of his six assists in the second half. He found Sean McDermott for the go-ahead 3-pointer with 49.9 seconds left.

“Kamar did a great job of getting me the ball in a spot where it was an easy shot: a step-in 3,” said McDermott, who scored 11 of his game-high 25 points during an 18-3 run early in the second half. “He's such a good player offensively that when he gets downhill, he attracts so much attention. I thought he got downhill and they brought three or four guys to him, and he found the open guys.”

Like the Marquette game, Baldwin was the catalyst for the turnaround. Butler trailed by as many as 14 points until Baldwin adjusted to Georgetown's defense.

“They were over-helping, so it was just easy to find the shooters and just let them do what they do,” Baldwin said.

Georgetown coach Patrick Ewing was upset that a late block by Baldwin on a Mac McClung layup attempt wasn't called goaltending, but acknowledged there were bigger problems that contributed to blowing such a big lead.

“We couldn't make any baskets, they were making them (and) we couldn't get any stops," Ewing said. ”We did some good stuff, but we didn't do enough stuff to be able to come away with the win."

Butler: Comeback or not, the Bulldogs miss point guard Aaron Thompson. He has now missed two consecutive games with a wrist injury, and Butler had to rally each time. Baldwin can clearly flip a switch, but Butler's offense works better with Thompson setting the table.

“It's more just pain tolerance and comfort,” Jordan said. “To be able to do what we does, obviously he's got to have both hands as a point guard to be able to play like Aaron Thompson."

Georgetown: A team that struggles on defense can't afford to go cold. Especially with just a seven-player rotation, the Hoyas can get worn down easily by talented opponents, and their upcoming schedule doesn't get any easier.

“With our ballclub the way we area right now, Mac and Omer, they have to shoot better than they did tonight,” Ewing said. “If we're going to be successful, if we're going to go to the place where I believe that we can go, those two guys have to do a better job.”

Butler: Hosts Providence on Saturday afternoon before a showdown next week against Villanova. The Friars have lost three in a row and four of five.