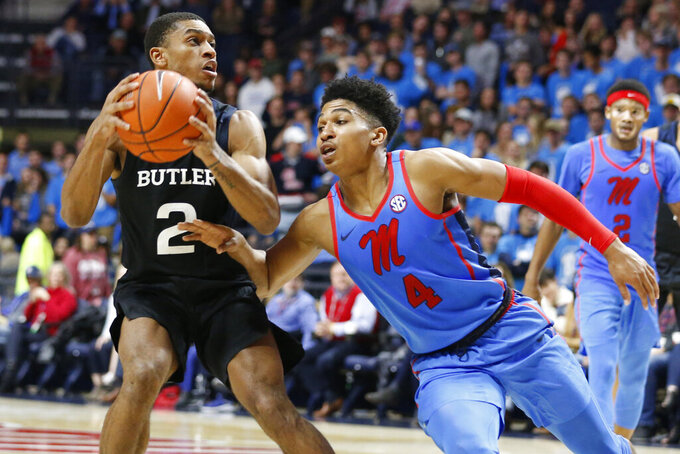 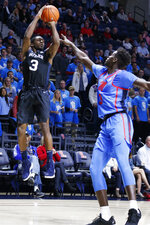 OXFORD, Miss. (AP) — Another big performance from Kamar Baldwin kept No. 24 Butler unbeaten after an early-season test in an SEC arena.

Baldwin scored a season-high 31 points and the Bulldogs opened a large lead in the second half before holding off Mississippi 67-58 on Tuesday night in a game they never trailed.

“We swung first. Then we held on,” Butler coach LaVall Jordan said. “We showed poise on the road and we executed. And what can you say about Kamar? He's playing at a really high level.”

Baldwin shot 11 of 16 from the field, including 4 for 5 from 3-point range, to lead the Bulldogs (8-0). He added six rebounds and three assists.

Jordan Tucker and Bryce Nze each had eight points for Butler, and Nze grabbed a team-high seven rebounds.

“My teammates did a great job of finding me when I got to the open spots,” Baldwin said. “When they come to me, I'm supposed to hit the shots.”

After trailing 31-22 at halftime and 50-34 midway through the second half, the Rebels pulled to 52-48 on Tyree’s layup with 9:11 left. Butler answered with an 8-3 run, highlighted by six points from Baldwin, and the Rebels never got closer than seven again.

“I saw some positive things tonight and I was proud we made a great comeback,” Mississippi coach Kermit Davis said. “Their best player just took over the game. It's that simple. We missed shots down the stretch and Butler is way too good for that.”

Butler: This was an NCAA Tournament resume-building road win. Picked to finish eighth in the Big East preseason coach's poll, the Bulldogs appear to be much better than predicted. They raced to a 22-8 lead and never trailed as Baldwin had 12 points in the first half while missing only one shot from the field.

“I thought that 22-8 start was huge,” Jordan said. “We challenged our group coming in to get off to a good start and we prepared well. We got contributions from everybody in that fast start.”

Ole Miss: Sy, a 6-foot-10 junior college transfer, had his best performance of the season — including three dunks in the first half. ... Since starting swingman Luis Rodriguez was injured, the Rebels have lost two of three games. A broken left foot will keep Rodriguez sidelined for eight weeks.

Butler: Winning on the road against an SEC opponent coming off an NCAA Tournament berth last season should at least be enough to keep the Bulldogs ranked.

Butler: At home against Florida on Saturday, the third SEC opponent in a four-game stretch.