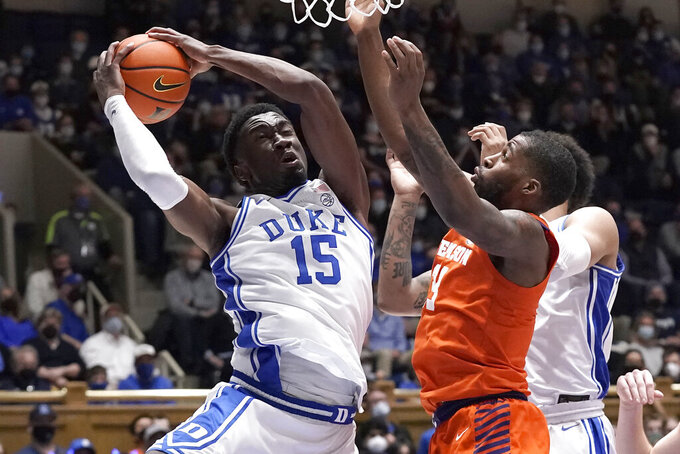 “It was winning time,” Banchero said. “Coach drew up the play for me again. He put the trust in me to score down low. I had no choice but to finish.”

Banchero scored four of his team-high 19 points in the final 90 seconds as ninth-ranked Duke pulled away late from Clemson for a 71-69 win Tuesday night.

Tyson’s layup with 3:19 remaining gave Clemson a two-point lead late. But Duke closed the game on an 8-4 run.

“It’s a tough loss for them and a great win for us. Both teams played their hearts out,” Krzyzewski said. “(Clemson was) one play away from winning. It was that kind of game. We’ve been in a lot of them.”

Duke’s largest lead over the Tigers was seven points and it came early in the second quarter, following an 8-2 run where Moore tallied all of the Blue Devils’ points.

Clemson and Duke traded baskets for the majority of the first half, until the Blue Devils broke off a 10-5 run to knot the game at 36 at intermission. Both teams traded a barrage of 3-pointers, as Clemson shot 11 of 26 from deep and Duke shot 10 of 20.

“There were a couple opportunities in the second half, where I felt like we got some good balls inside and didn’t quite finish,” Clemson coach Brad Brownell said. “Guarded (Duke) about as well as could guard them, just wasn’t quite good enough.”

Duke: The Tigers never let the Blue Devils fully pull away in this one, but could have avoided the adversity with better defense. Clemson’s 42.3% shooting from behind the arc was the second-worst mark the Blue Devils have allowed this season.

“We are not a perfect team. We are a young team that has had stoppage, injuries and is playing our butts off,” Krzyzewski said. “I haven’t seen a perfect team yet and we certainly are not one of them.”

Clemson: Before Tuesday, Clemson was 6-0 this season when it made 10 or more 3-pointers, and 8-2 when it shot better than 40% from that range. The Tigers met both of those marks Tuesday, and while it wasn’t quite enough to beat the Blue Devils, sharp shooting seems to be a recipe for success.

After making each of his three shot attempts Tuesday, Williams is shooting 24 of 30 on field goals over his last four games. On the other end, Williams had three blocks against Clemson and leads the ACC with 3.26 blocks per-game this season.

While Hall led Clemson in scoring, he was often hounded by Williams in the paint. Hall shot just 6 of 21 on the night.

“Williams is an elite defensive player in this league,” Brownell said. “Gets you looking over your shoulder like, ‘Where is he?’ … PJ didn’t finish as well tonight against Mark Williams as we probably needed him to, to win the game.”

The only ACC team that's currently ranked, Duke fell three spots in the latest poll after losing to Florida State last week. Gritty wins like this can help keep the Blue Devils near the top of the rankings.

Trevor Keels missed his second straight game for Duke with a calf injury. Starting in his place again was Jeremy Roach, who had eight points and a team-high nine assists.

Clemson: Off until Feb. 2, when the Tigers host Florida State.