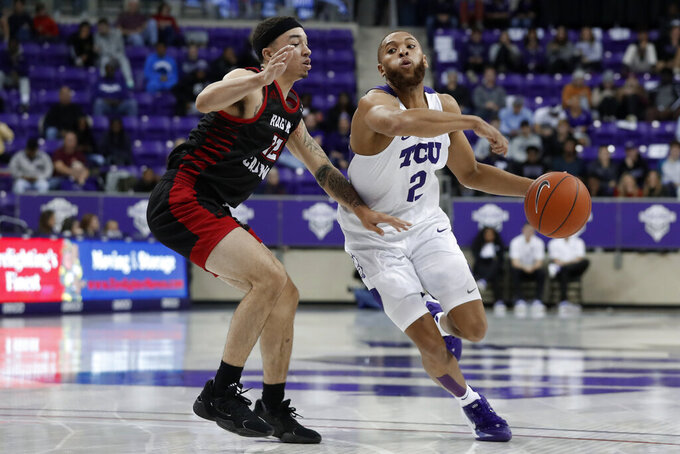 Louisiana-Lafayette guard Calvin Temple (22) defends as TCU's Edric Dennis (2) works to the basket during the second half of an NCAA college basketball game in Fort Worth, Texas, Tuesday, Nov. 12, 2019. (AP Photo/Tony Gutierrez) 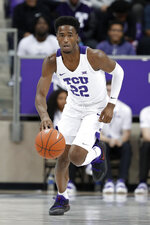 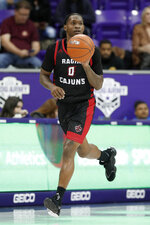 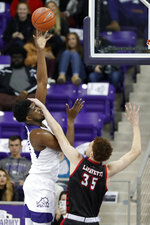 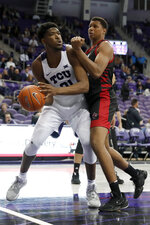 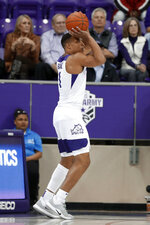 FORT WORTH, Texas (AP) — There is one way for Desmond Bane and TCU to get away with shooting a lot of 3-pointers.

Bane made seven of TCU's school-record 18 3-pointers and scored 25 points as the Horned Frogs beat Louisiana-Lafayette 98-65 on Tuesday night.

Coach Jamie Dixon wants the Frogs (2-0) to have inside touches before shooting 3s. He wants a balance of layups, some drives to the basket and to make sure big man Kevin Samuel gets the ball.

RJ Nembhard added a career-high 16 points, while PJ Fuller had 15, and Edric Dennis Jr. 14. Jaire Grayer, playing on his 23rd birthday, had 11 points and nine rebounds. Grayer and Dennis each made three 3-pointers.

Samuel had 12 points with 12 rebounds.

Jalen Johnson led Louisiana with 21 points and Cedric Russell had 18 with four 3-pointers while playing the entire first half but not after that because of a groin issue. Mylik Wilson had 16 points.

"TCU got more physical with us and took the lead into halftime, and then Russel got hurt at the end of the first half," coach Bob Marlin said. "TCU just outplayed us, they were more physical."

Louisiana had its largest lead at 27-21 when Russell hit a 3-pointer with 11:11 left in the first half. The Ragin' Cajuns then missed nine of their next 10 shots and had five turnovers in span of 7½ minutes when TCU had four different players make 3-pointers.

Francisco Farabello, TCU's freshman guard from Argentina, had the go-ahead 3 that made it 29-27 before Grayer made the first of his two 3s in that big spurt. By time Grayer hit his next 3 with 5:19 left, the Frogs had a 40-30 lead.

After getting outrebounded 35-33 by Division III Southwestern in the opener, TCU finished with a 42-31 edge.

"No question, coach has been stressing that. We kind of made a joke of it because of how much he's been saying it," Bane said. "We did the job tonight. Hopefully we can continue to do that moving forward."

Louisiana-Lafayette: The Ragin' Cajuns missed a chance to improve to 3-0 for the first time since 1995-96. They score a lot of points — they averaged 90.5 the first two games and were the Sun Belt Conference's top scoring team the past six seasons. They made 10 of their first 15 shots, five of those makes being 3-pointers, for 27 points in the first 9 minutes and were on pace for 108.

TCU: The Horned Frogs are 2-0 for the sixth season in a row, Dixon's fourth at his alma mater. Dixon got his 398th win in 17 seasons. ... Bane and Samuel are TCU's only returning starters.

Louisiana-Lafayette will be back at home to play Youngstown State on Friday night before playing five of their six games after that away from campus.