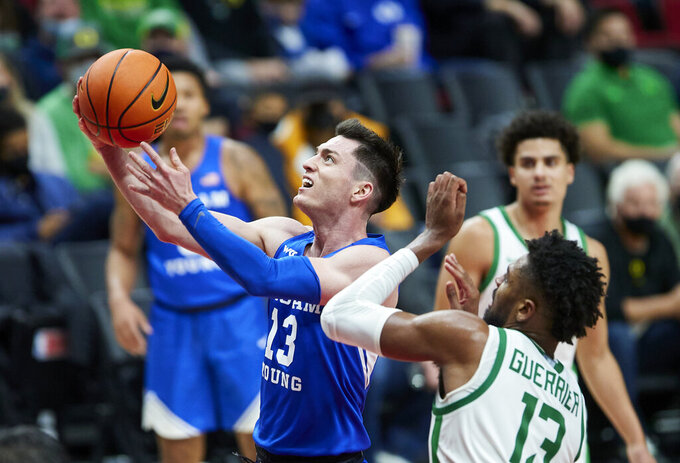 PORTLAND, Ore. (AP) — The hoots and hollers from BYU's locker room could be heard well down the hall in Portland's Moda Center.

The celebration was spirited after BYU thumped No. 12 Oregon 81-49 on Tuesday night in the Phil Knight Invitational.

Alex Barcello had a season-high 25 points, including four 3-pointers, and Te'Jon Lucas added 12 points for the Cougars (3-0), who led by as many as 33 points.

"Obviously this was a pretty highly ranked team, a lot of talented guys. So this is definitely a huge win for us," Barcello said. “Starting off the season 3-0, that's something all of us would have wished for a few months ago. Now that we're here it's definitely great to have those three wins under our belts. But we need to move on to the next game.”

Eric Williams Jr. led Oregon (2-1) with 12 points. The Ducks — a four-point favorite, according to FanDuel Sportsbook — shot 32% from the floor and made three of 14 3-point attempts.

The 32-point margin of victory was BYU's largest ever over a ranked team.

Williams was the lone player in double figures for the Ducks, who came into the game with five players averaging 10 or more points. It was Oregon's biggest loss ever as a ranked team, and only the third loss of 30 or more points under coach Dana Altman.

Oregon opened the season with wins over Texas Southern and SMU and jumped a spot in the rankings after opening the season at No. 13.

BYU was unranked but received votes for the AP Top 25.

“Getting beat by 30 points, that just hadn't happened to us in I don't know,” said Altman, who took responsibility for the loss. “It shouldn't happen for our program. I'm totally embarrassed. ”

BYU improved to 3-5 against ranked teams under coach Mark Pope. The Cougars beat then-No. 2 Gonzaga in Provo, Utah, on Feb. 22, 2020, one of just two losses for the Bulldogs that season.

“We're chasing something really big,” Pope said. “We want to do some things. We're trying to be great. So this is a positive step. But we've got to go tomorrow and we've got to find a way to get better.”

BYU took an 19-9 lead in the opening half on Barcello's jumper. Oregon had not trailed in a game this season.

Barcello, who came in averaging 20.5 points, didn’t miss from the floor until the 13:35 mark of the second half.

“I'm disappointed in those guys, but not nearly as disappointed as I am in myself,” Altman said about the loss. “I sincerely mean that. I am mad at myself because there's no way with the talent that we have on this team that that should happen.”

BYU: The Cougars opened the season with wins over Cleveland State and San Diego State. ... BYU had 18 points off turnovers, compared to Oregon's five. ... Fousseyni Traore finished with 10 points and six rebounds. ... Barcello has made 38 straight free throws, an ongoing BYU record.

Oregon: The Ducks' single-game record for rebounds, 77, came against BYU in 1955. Jim Loscutoff sent the individual record for rebounds in that game with 32. ... Oregon had just one assist in the first half, finishing with just seven for the game.

Oregon travels to Las Vegas to face Chaminade on Monday in the Maui Invitational.