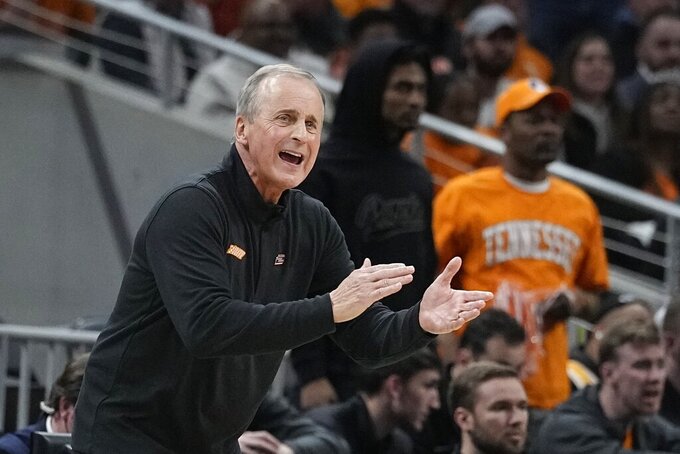 FILE — Tennessee head coach Rick Barnes watches his team in an NCAA college basketball game against Michigan on March 19, 2022, in Indianapolis. Barnes has a more experienced squad this season with two of the three Volunteers who tested their NBA draft stock among nine players back this season. (AP Photo/Darron Cummings)

Tennessee finally ended a decades-long drought last season. Coach Rick Barnes just might have a better team this time around trying to do something that the Volunteers have never managed.

The biggest knock on Barnes is his teams' struggles to go deep in the NCAA Tournament. Tennessee hasn't reached a regional final since 2010 when the Vols lost by a point to Michigan State, and Barnes is the fourth different coach trying to end that skid.

Last March, the Volunteers won the Southeastern Conference Tournament championship for the first time since 1979 and finished fifth in the final AP Top 25 poll. Then they lost to 11th-seeded Michigan by 10 in the second round of the NCAA Tournament for a 27-8 record.

Barnes certainly has a more experienced squad with two of the three Volunteers who tested their NBA draft stock among nine players back this season. Tennessee starts this season ranked 11th.

“Obviously we're counting on the leadership that we had a year ago to pick up not only where it left off but take it to another level, and there's not one person in the program that doesn't have to get better some way, some how,” Barnes said.

Tennessee lost guard Kennedy Chandler to the NBA after one season when his hometown Memphis Grizzlies traded up to get him from San Antonio at No. 38 overall. Now Barnes has 6-foot-8 forward Julian Phillips, and the Tennessee coach says he doesn't think Phillips is thinking one and done for now.

Barnes said Phillips has sought out their director of sports performance Garret Medenwald and has been a dream to coach with no sense of entitlement.

“Talk to him or even his family, his circle of trust, they'll tell you there'll be a time to make those decisions,” Barnes said. “I can tell you we're excited and he's happy he's with us because he gives us another guy who gives us terrific versatility. ... He's got a wealth of talent.”

NO NBA FOR NOW

The Vols have returning starters in guards Josiah-Jordan James and Santiago Vescovi. They are a big reason why Tennessee has 58.3% of its scoring from last season back, trailing only Georgia and Texas A&M in that category.

WIth Zakai Zeigler back for his second season, the Vols have three of their top four scorers back. Vescovi averaged 13.3 points a game, James had 10.3 and Zeigler 8.8. Vescovi joined Chris Lofton as the only Vols in program history to make 100 or more 3s in a single season with 102.

Fans will have to get used to not seeing 6-9 John Fulkerson, who has wrapped up his college career after six seasons, one of seven players gone from last season's roster. The Vols have plenty of options to replace him and bulk up inside at the same time.

Olivier Nkamhoua is back after season-ending surgery on his left ankle in early February. Barnes said Nkamhoua benefited from playing with Finland over the summer. The Vols also have 7-1 Uros Plavsic along with 6-11 Jonas Aidoo.

As if playing in the SEC isn't challenging enough, Barnes upped the ante. The Vols will play No. 2 Gonzaga in an exhibition Oct. 28, helping raise money for the McLendon Foundation to help minorities wanting to work in athletic administration. That adds to a slate featuring six AP Top 25 preseason teams.

Tennessee will play Colorado in Nashville on Nov. 13 and host Florida Gulf Coast. The Vols will play Butler and either BYU or Southern Cal in the Battle 4 Atlantis. Other nonconference games include Maryland in the Hall of Fame Invitational and a trip to Arizona on Dec. 17.

The SEC slate starts Dec. 28 against Mississippi. Barnes will coach against his old team Texas in Knoxville on Jan. 28 in the SEC/Big 12 Challenge. The SEC Tournament is back in Nashville starting March 8, where the Vols will hope for a repeat.