Barnes wants third-ranked Vols to take nothing for granted 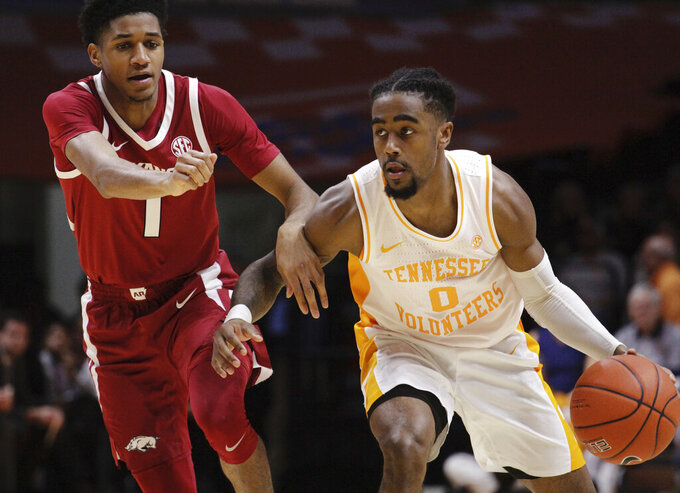 Tennessee guard Jordan Bone (0) brings the ball down the court against Arkansas guard Isaiah Joe (1) in the second half of an NCAA college basketball game, Tuesday, Jan. 15, 2019, in Knoxville, Tenn. (AP Photo/Shawn Millsaps)

"This game is a game of habits," Barnes said Thursday. "If you start letting down, it will snowball on you quicker than you might imagine."

So far, Tennessee opponents have felt everything's snowballing on them.

The Volunteers note that the only other major-conference teams over the last 20 years to outscore their first four league opponents by at least 100 points were Duke in 2000-01 and Florida in 2012-13. Both those teams won at least a share of their conference title, and Duke went on to win the national championship.

Even so, Barnes isn't satisfied.

He spent much of his news conference noting that Tennessee was outscored in the second half of its 106-87 blowout victory Tuesday against Arkansas . It didn't really matter to him that Tennessee built a 55-34 halftime advantage, led by as many as 30 points and produced its highest single-game scoring total since November 2009.

Barnes credited Arkansas for its second-half effort but added that "if we don't get better, we're not going to have the year we want to have." He acknowledged Thursday that Tennessee shot effectively against Arkansas but said "the fact is that's probably about the only thing we did do well."

Tennessee's players weren't bothered by Barnes' pointed remarks after a 19-point victory. Forward Admiral Schofield said the Vols "went backward" in the second half and guard Jordan Bowden noted that Tennessee allowed too many second-chance opportunities.

The Vols (15-1, 4-0 SEC) have spoken for several weeks about needing to recapture the intensity they showed on defense last season.

"During the season, we have struggled in the second half defensively and just staying with it," guard Lamonte' Turner said after the Arkansas game.

Barnes' criticism comes at a time when Tennessee is being showered with praise elsewhere as it challenges for its first No. 1 ranking since 2008. With No. 1 Duke losing to Syracuse on Monday, Tennessee has a chance to move atop next week's Top 25 if it beats Alabama (11-5, 2-2) on Saturday and No. 2 Michigan loses at Wisconsin.

A victory over Alabama would give Tennessee its first 12-game winning streak since the 1976-77 season. The Vols haven't faced a double-digit deficit all season and rank second among all Division I teams in field-goal percentage (.516) and assist-turnover ratio (1.71).

Florida gave Tennessee its only major challenge in SEC competition thus far, as the Vols won 78-67 by scoring the game's final nine points. Tennessee won its other three SEC games by an average margin of 29.7 points.

Tennessee still won't have any reason to overlook its next opponent.

Alabama has won three of its last four matchups with Tennessee. In the only meeting between these two teams last year, Alabama won 78-50 to hand Tennessee its most lopsided loss of the season.

Tennessee's top six scorers are all juniors and seniors who need no reminders of Alabama's recent success in this series.

"They have great memories," Barnes said. "Some things, they bring up before we get ready to play other teams."