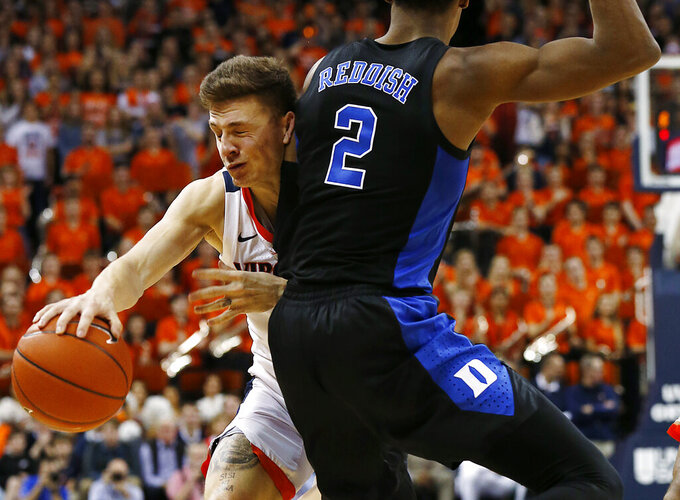 Virginia's Kyle Guy is fouled by Duke's Cam Reddish (2) during the second half of an NCAA college basketball game in Charlottesville, Va., Saturday, Feb. 9, 2019. (Mark Gormus/Richmond Times-Dispatch via AP) 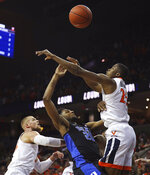 In No. 2 Duke's latest installment of Freshmen Gone Wild, all three — and point guard Tre Jones — had starring roles Saturday night as the Blue Devils used an early barrage of 3-pointers to stun No. 3 Virginia, and then held off the Cavaliers, 81-71, to sweep the season series.

"That really sets the tone for us and we played defense today as well," Barrett said of the fast start that saw him make five 3-pointers before the game was 12 minutes old, helping Duke quiet a sold-out John Paul Jones Arena with the host Cavaliers already trailing 29-15.

"We were just in our zone and it's great to see when our team is like that," Barrett said.

He finished with 26 points, Williamson had 18 and Reddish had 17, including three 3-pointers early in the second half.

"It's any given night for all of us," Reddish said after finishing 5 of 8 from beyond the arc, with three coming in a span of less than three minutes. "We all can do a mixture of everything and it just depends on who gets found, who's open and it's a simple as that."

"It's a little bit deflating when they're banging 3s and you're trying to keep them out of the lane," Virginia coach Tony Bennett said.

Bennett thought his team might have over-adjusted by focusing too much on trying to close off the inside, but his counterpart, Duke's Mike Krzyzewski, thought it was at least as much a case of his own players recognizing the strategy change.

"My players felt it," Krzyzewski said. "That little bit of room — they took advantage of it without any kind of coaching."

Duke led 31-17 before two 3-pointers by Guy, one by Jerome and another by Kihei Clark fueled an 18-8 run for Virginia that closed the gap to 39-35 at the half. After the break, Reddish connected three times from deep as the Blue Devils pushed the margin to 52-41 in just over four minutes.

Virginia kept trying to close the gap, and got within 66-61 on De'Andre Hunter's 3-pointer with 5:25 left, but Marques Bolden scored in close for the Blue Devils, Williamson scored on a stickback and Tre Jones hit a pull-up in the lane, boosting the margin back to 72-61.

LeBron James sat under the basket at the Duke end of the floor and didn't get up to leave until about 1:15 was left on the game clock. Former Duke great Grant Hill was also in attendance, as was Ralph Sampson, Virginia's three-time national player of the year.

Late in the game, Hunter was open in the left corner and either lost control briefly or took too much time setting up for a 3-pointer. By the time he got it off, Williamson came flying at him and knocked the shot several rows deep, one of his three blocks.

"There's maybe two people in the world that can make those plays and they both were in our gym," Bennett said in an apparent nod to James' visit.

Duke: Williamson is the player that everyone seems to focus on in pregame warmups because of his physical gifts, but it's Barrett that leads the Blue Devils in scoring (23 points per game to Williamson's 22 entering the game). When Barrett and Reddish shoot as well as they did Saturday, Williamson can be a part-time decoy who still manages to do plenty of damage.

Virginia: The Cavaliers appeared shocked by the first 12 minutes, during which the Blue Devils were 7 of 8 on 3-pointers and 10 of 14 overall in taking a 29-15 lead. They gathered themselves and had several runs that energized the crowd, but a team that's 20-0 against everyone else never could get over the hump against arguably the country's most talented squad.

Duke: The Blue Devils remain on the road, playing at No. 16 Louisville on Tuesday night.

Virginia: The Cavaliers head to Chapel Hill to play No. 8 North Carolina on Monday night.