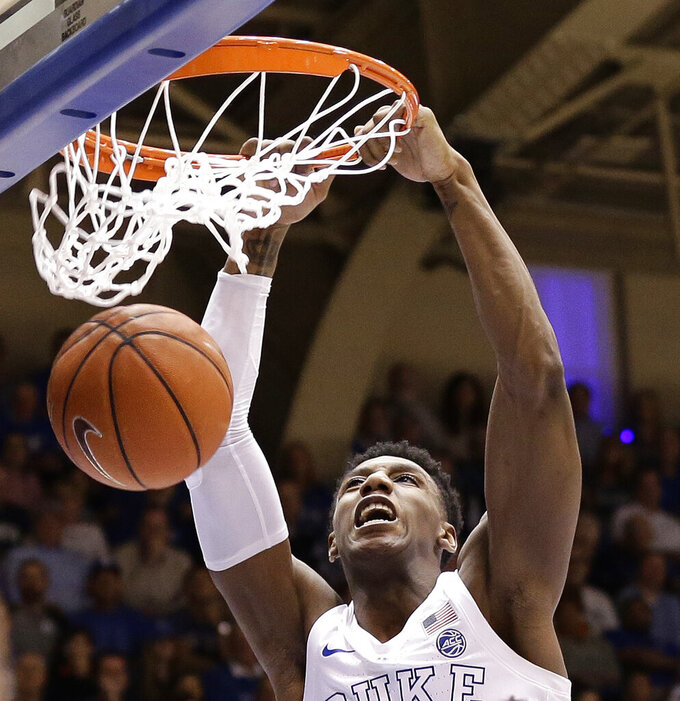 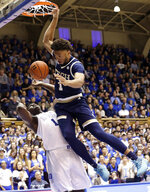 DURHAM, N.C. (AP) — Mike Krzyzewski could tell something was off with his Duke team, so he burned a timeout shortly after halftime to talk about it.

That the second-ranked Blue Devils responded with yet another double-figure victory taught the Hall of Fame coach something significant about them.

RJ Barrett had 24 points and 11 rebounds, and Duke pulled away to beat Georgia Tech 66-53 Saturday in point guard Tre Jones' return to the lineup.

"Our guys were just different (after that timeout), which says a lot about them," Krzyzewski said. "This is a game you lose if you're thinking about being a winner. It's a game that winners win, when you can turn it around with 18 minutes to go and just really not playing well, and then playing great."

Zion Williamson added 22 points to help the Blue Devils (17-2, 6-1 Atlantic Coast Conference) win their third straight and 12th in a row in the series with Georgia Tech.

Duke finished a season-worst 2 of 21 from 3-point range but hit 52 percent from the field in the second half to win its lowest-scoring game of the year.

Abdoulaye Gueye had 14 points and Michael Devoe added 11 for the Yellow Jackets (11-9, 3-4), who have lost four of six but threw a scare into Duke for most of the day. Evan Cole's layup put them up by eight points with just over 18 minutes left and prompted Krzyzewski to take that turn-it-around timeout.

"He just challenged us to get back to playing like ourselves," Jones said. "We weren't showing any energy, any enthusiasm — nothing out there. We were extremely dead and we knew we just had to pick it up, have a little life."

Georgia Tech: The Yellow Jackets' tricky zone defense frustrated the ACC's highest-scoring offense, holding Duke to a season-low 27 first-half points and building an eight-point lead early in the second half. It was precisely the kind of gum-it-up game they wanted, but they couldn't keep Duke contained over the final 15 minutes.

"That's our only way of survival in this league," coach Josh Pastner said. "We have to be really, really good defensively, and that's who we've been in our time here. ... That's just kind of who we are and what we do, and if we don't do that, we're not going to have any chance of success."

Duke: Three-point shooting has to be a concern for the Blue Devils, who entered ranked 13th in the ACC for hitting just 31 percent of their attempts from beyond the arc. This was the second time in eight days that Duke shot in the teens — or worse — from 3-point range. The Blue Devils hit just 9.5 percent, after a 14.3-percent performance in the victory over Virginia.

Jones was back in the starting lineup less than two weeks after separating the AC joint in his right shoulder, an injury that only cost him two full games. The ACC's leader in assist-to-turnover ratio had four assists to one giveaway while adding four rebounds, a steal and six points on 3-of-7 shooting. "I feel like I wouldn't play unless I'm 100 percent," Jones said. "I wanted to make sure, mentally, I felt like I was 100 percent and I feel like I am now."

Cam Reddish was much better passing the ball than he was shooting it. Reddish was just 1 of 11 from the field — and 1 of 8 from 3-point range — but had a career-high six assists, including one long-distance lob to Williamson that the freshman phenom slammed home to give Duke its largest lead to that point, 56-44, with about 6 minutes left.