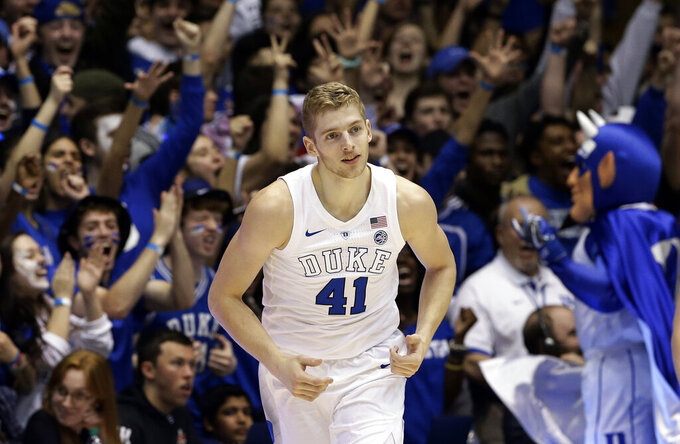 Duke's Jack White (41) reacts with the crowd following his 3-point basket against Miami during the first half of an NCAA college basketball game in Durham, N.C., Saturday, March 2, 2019. (AP Photo/Gerry Broome)

DURHAM, N.C. (AP) — Jack White took the pass from Tre Jones in the left corner, squared to the basket and launched a 3-pointer.

Unlike the previous 28 he shot, this one went in.

His slump is over, and now No. 3 Duke hopes its slide is, too.

The Blue Devils routed Miami 87-57 on Saturday behind 19 points and 10 rebounds from RJ Barrett and 19 points from fellow freshman Cameron Reddish.

With national player of the year candidate Zion Williamson sidelined for a third straight game with a mild right knee sprain, Duke (25-4, 13-3 Atlantic Coast Conference) never trailed and shot 57 percent to bounce back from its second loss in three games — which coincided with Williamson's injury.

"Everyone plays their part in the team and does their thing, but our focus right now is to get Zion healthy and get everyone healthy and feeling good," White said. "Just trying to have everyone playing their best basketball by that point. But you know, it's not just about me — it's a team effort."

White's struggles from 3-point range had taken on a life of their own. He hadn't hit one since Jan. 12 at Florida State, was 0 for 10 in a loss to Syracuse two nights after that and missed all 12 he attempted in the month of February.

"I haven't gone through a stretch like that before in my life," said White, who went 3 for 3 from 3-point range. "Towards the latter end of it, it was more surprising than anything when I'd miss because I'd felt good and I was like, 'Why?'"

When he finally swished one with 12:34 left in the first half against the Hurricanes, Cameron Indoor Stadium erupted with arguably its loudest cheers of the season and the Crazies chanted "Jack is back."

"I was really happy for him," Barrett said, "but I had to get back on defense."

It wasn't just a feel-good moment for White and the Blue Devils. It started the run that completely overwhelmed the Hurricanes. Starting with that shot, Duke outscored Miami 36-11 over the final 12-plus minutes of the half.

Chris Lykes, who scored in double figures in 24 of Miami's previous 27 games, finished with four points on 1-of-15 shooting while being hounded by Jones. The Hurricanes trailed by 25 when he hit his only bucket.

"For the first time all season, I thought our emotions were maybe a little bit out of control," coach Jim Larranaga said. "We couldn't calm ourselves down to make a free throw or a shot or make a good pass or good decision."

Miami: Asking the depleted Hurricanes to snap their yearlong road losing streak at Cameron seemed like a tall order — even against a Duke team missing its headliner. Miami fell to 0-9 on the road this season, 0-8 in the conference and were playing four days after blowing a 10-point lead in the final 2 minutes of a loss at Wake Forest. It's effectively come to this for the Hurricanes — either win at Virginia Tech next week, or carry their road slide into 2019-20.

Duke: Barrett averages an ACC-best 23.3 points, has led the league in scoring virtually all season and has shouldered the scoring load in Williamson's absence. Barrett entered averaging 24 points, eight rebounds and six assists while shooting 51 percent, and with his godfather — two-time NBA MVP Steve Nash — sitting behind the Duke bench, he finished three assists shy of his second triple-double in two weeks.

"With Zion being out, everybody kind of gets the ball more, everybody has to make more plays," Barrett said.

Coach Mike Krzyzewski says there is "no time pressure" on Williamson, adding that the star freshman and second-leading scorer in the ACC "hasn't done anything with contact" since he was injured in the opening minute of a loss to North Carolina on Feb. 21. "We're not in any hurry or whatever," Krzyzewski said.