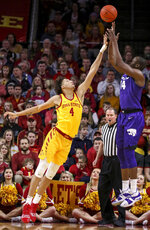 AMES, Iowa (AP) — No. 20 Iowa State appeared to have done just enough to survive on a snowy and sleepy Saturday in Ames.

Barry Brown had other ideas.

Iowa State, which hasn't won since blowing out Kansas last week, was up seven with five minutes left. Brown hit two free throws with 16 seconds left to make it 57-56 Iowa State, and Lindell Wigginton missed the front end of a subsequent one-and-one for the Cyclones.

Brown, who finished 9 of 20 from the floor, then drove through the paint for the winner — which came on the heels of a 21-point comeback against West Virginia in K-State's last game.

"I just tried to make the plays when opportunity presents itself," Brown said. "My teammates and coach believe in me when it comes down to the wire. They believed in me to come down and make a play."

Nick Weiler-Babb had 11 points and five assists to lead the Cyclones. Iowa State responded to its 77-60 win over the Jayhawks with a 73-70 loss at Baylor and a sloppy finish against the Wildcats.

"I think everybody jumped and ran with one game. Now your character is tested, and you've got to go back to work," Prohm said.

Big 12 preseason player of the year Dean Wade, who had been out since the middle of December with a torn tendon in his right foot, returned for the Wildcats. He had two points and nine rebounds in 22 minutes.

"He still has no rhythm and no conditioning, but he gets nine rebounds and got a big bucket late," Kansas State coach Bruce Weber said. "It's not like riding a bike where you can just jump on and ride it."

Iowa State: While K-State got Wade back, the Cyclones played with big man Cam Lard — who missed Saturday's game with a sprained ankle. Iowa State also said after the game that fellow big man Solomon Young will miss the remainder of 2018-19 with a groin injury, and the Cyclones will seek a medical redshirt.

Kansas State: Getting Wade back is huge as far as K-State's NCAA Tournament hopes are concerned, as was this win over the Cyclones. The Wildcats might be a factor in the Big 12 race after all.

Iowa State fell behind 37-26 to open the second half, but a late 14-2 run gave the Cyclones what looked like enough of a cushion to survive. Wigginton gave the Cyclones a 48-46 lead on a layup in the paint, and Weiler-Babb followed with a 3. Marial Shayok then hit a layup to cap a stretch of nine straight points for Iowa State and make it a 55-48 game. But Weiler-Babb missed a wide-open 3 with about 40 seconds left.

Iowa State lost despite holding the Wildcats to 35.7 percent shooting from the floor. ... Kamau Stokes had 12 points for Kansas State. ... Shayok had a season-low nine points for the Cyclones. He entered play averaging 20.1 points per game. ... K-State outrebounded Iowa State 39-31. ... The Cyclones went just 6 of 12 from the line.

Iowa State is one of the 25 most talented teams in the country. But the Cyclones likely won't be ranked as such on Monday.