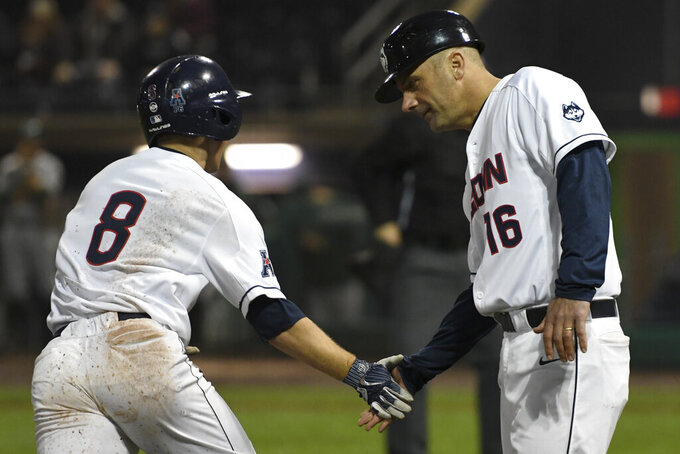 UConn head coach Jim Penders congratulates Michael Woodworth (8) as he rounds the bases in the eighth inning of an NCAA college baseball game against Tulane in Hartford, Conn., in this April 27, 2018, photo. Penders, the nephew of former college hoops coach Tom Penders, credits Connecticut's basketball programs and their combined 15 national titles, with creating an athletics culture that has helped him recruit top players to Storrs and convince officials to build his team's just opened state-of-the art Elliot Ballpark, which comes complete with an artificial turf field and heated benches. (John Woike/Hartford Courant via AP)

STORRS, Conn. (AP) — UConn baseball coach Jim Penders doesn't mind working at a school where it's still snowing when the season starts and fans are more concerned about 3-pointers than 3-run homers.

“I’ve got a basketball in my office to remind me that, hey you might not be here if it wasn’t for this bigger, orange ball,” said Penders, who is in his 18th season at Connecticut, his alma mater. “Yes, UConn is a basketball school, but that doesn't mean it can't be a baseball school too.”

This past Saturday, the last day of the regular season, the Huskies (30-16), won the Big East regular-season title, a top seed in this week’s conference tournament and a likely spot in the NCAA tournament for the 22nd time overall and the seventh during Penders' career.

They had to win 26 of their last 32 games to do that, including a four-game sweep of Seton Hall on the final weekend that vaulted them from third place to first.

Sophomore Kyler Fedko whose three-run homer in the last game brought his average above .400 and cemented the title-clinching 10-2 win, said it takes a certain toughness to play baseball at UConn.

“Cold weather, snow on the ground, it doesn’t get nice until literally this week,” he said. “It was like 50 degrees three weeks ago in May. This is home."

The school was a baseball power decades ago, going to five College World Series between 1957 and 1979. Penders' father and his uncle played together on one of those in 1965.

Penders has built a program that has produced 53 players signed or drafted into the pros, including major leaguers such as Matt Barnes, George Springer, Nick Ahmed, Scott Oberg and Mike Olt.

Most of them came back recently to tour the new ballpark, which has seats for 1,500 fans and a large berm stretching down the right field line and into center field that can seat thousands more.

Penders said he left the lights on after the tour and Olt was hitting balls out of the new park into the night.

“Coach Penders has done such a good job of establishing a program that will always compete in the Northeast,” said Barnes, the Boston Red Sox closer and one of the stars of UConn's 2011 squad. “They’ve done a terrific job of not only attracting quality talent but helping guys reach their true potential. When you combine what he’s able to do with the new facilities, UConn is without a doubt the No. 1 choice for Northeast players.”

Penders' players say the family atmosphere that Penders grew up with at UConn is a big part of his program's culture. The squad currently sports two pairs of actual siblings — Kyler and his brother, junior Christian Fedko, as well as fifth-year senior Chris Winkel and his brother, Pat, a sophomore.

“I don't know if it rubs off on everybody, but that's the type of relationship the entire team has together — extremely close knit, really, really bonded group that does everything together on and off the field," Chris Winkel said. “I think that definitely lends itself to the success we've been having this year."

Penders, who is 602-413 at UConn, said he's never considered taking a “bigger” job and has always planned to follow the lead of Hall of Fame basketball coaches Jim Calhoun and Geno Auriemma, who turned their programs into elite destinations.

“I love it here and I can't imagine doing it anywhere else," he said. “If I didn't think it was possible to win a national championship, I would look elsewhere.”

The Huskies open play in the Big East tournament on Thursday against Xavier (25-24).