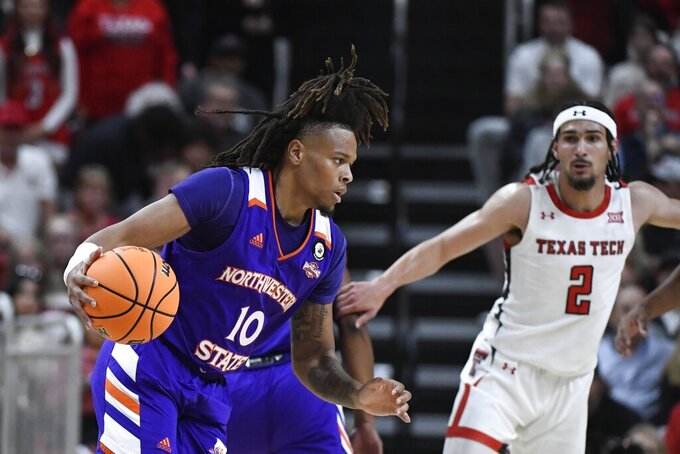 Northwestern State guard Joshua Williams (10) drives to the basket against Texas Tech during the first half of an NCAA college basketball game Monday, Nov. 7, 2022, in Lubbock, Texas. (AP Photo/Justin Rex)

“I was just trying to be aggressive out there,” Batcho, a 6-foot, 11-inch sophomore, said. “I felt confident.”

Batcho added 10 rebounds for the Red Raiders, who broke open a close game. Kevin Obanor and Kerwin Walton each added nine points for Texas Tech, which shot 24 for 46 from the floor.

“We talk to our guys about not beating ourselves,” Texas Tech head coach Mark Adams said. “Their offensive rebounding hurt us. We had a lot of mistakes, and we have a lot we can learn from. We have a young, young team, and we have to be patient.”

The Red Raiders quickly extended their 42-23 halftime lead with a 10-2 run at the start of the second half, pulling ahead 52-25 with 16:12 remaining on a pair of free throws by Robert Jennings.

"This was a learning curve, a learning experience for us,” Northwestern State head coach Corey Gipson said. “What I was really proud of was that not one time did our guys complain about anything. It shows the resiliency and maturity of the guys on the team.”

Texas Tech broke it open late in the first half, outscoring the Demons 15-6 during the final six-plus minutes and taking a 42-23 lead at intermission. Batcho fueled the flurry with six consecutive points before D’Maurian Williams converted a reverse layup just before halftime.

"He (Batcho) played well,” Adams said. “He has really improved since last season and continues to gain more confidence. He has been one of our most consistent players at both ends of the floor.”

Northwestern State is home against Ouachita Baptist on Thursday.