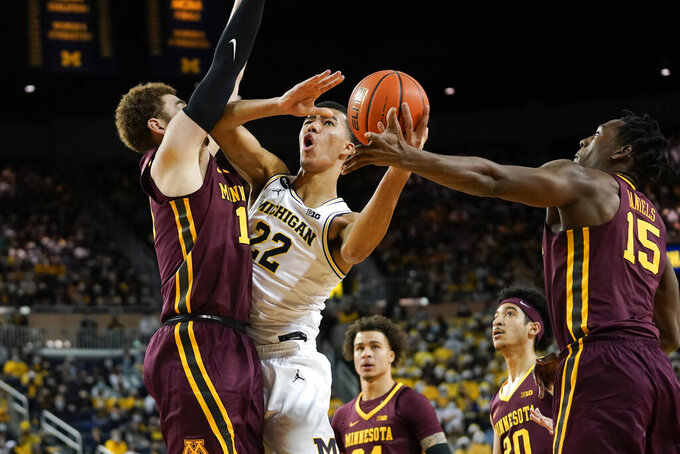 ANN ARBOR, Mich. (AP) — Jamison Battle scored a season-high 27 points — with 21 coming after halftime — as Minnesota launched a ferocious rally in the second period to beat Michigan 75-65 on Saturday night.

Willis and Battle scored 34 of Minnesota's 43 points in the second half. Willis scored seven early in the period as the Gophers pushed their opening run 15-4, leading 47-40 with 3-pointers from Willis, Loewe and Battle.

Minnesota, which was 2-for-8 from distance in the first half, made four 3-pointers in the second. Willis hit a deep, straightaway 3 to give Minnesota a 10-point lead with 9:22 remaining.

Hunter Dickinson led Michigan (6-4, 1-1) with 19 points and 10 rebounds for his fourth double-double this season. Dickenson was held to five points on 2-for-7 shooting in the second half after making seven of his first eight shots for 14 first-half points and boosting Michigan to a 36-32 halftime lead.

Devante' Jones added 14 points and Eli Brooks 12 for the Wolverines.

A Brooks drive pulled Michigan as close as 68-62 with 3:16 to play but Battle was 6 of 6 at the line and Willis added another free throw.

There were seven lead change six ties first half, but Minnesota took control in the second and never trailed over the last 17:29..

Next up for Minnesota is hosting Texas A&M-Corpus Christi on Tuesday. Michigan plays visiting Southern Utah on Dec. 18.