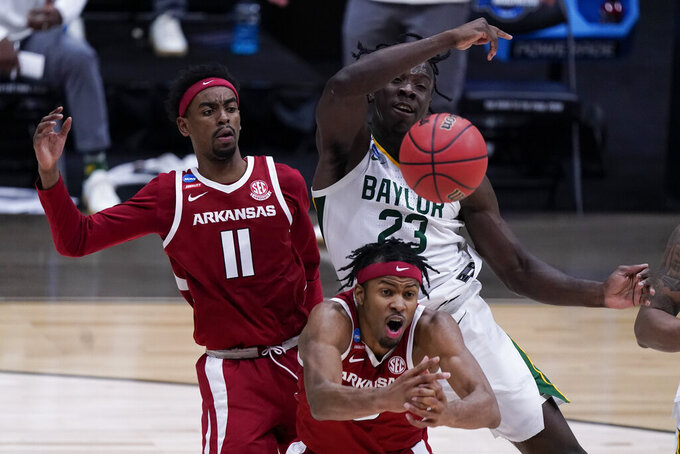 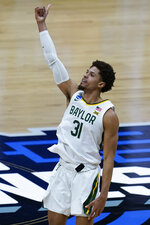 INDIANAPOLIS (AP) — Baylor had been on the cusp of the Final Four twice before under coach Scott Drew, falling to the eventual champion both times.

These Bears have a different kind of swagger to them, a confidence with the skill to back it up.

Now their long Final Four wait is over.

Baylor is headed there for the first time in 71 years, getting 22 points from MaCio Teague and a dominating defensive performance from Davion Mitchell to beat Arkansas 81-72 on Monday night.

“Just pure joy, excitement,” Drew said. “It was an emotional game, but seeing our guys have a chance to cut down the nets, it doesn't get much better than that.”

The South Region final was a reunion of former Southwest Conference programs aiming to join another (Houston) in the Final Four.

The top-seeded Bears (26-2) appeared to be barreling toward ending their Final Four drought with a dominating start.

The Razorbacks (25-7), who know a bit about March comebacks, revved up the Mus Bus after some early sputtering, trimming an 18-point lead down to four.

Mitchell and Teague stiff-armed them from there.

Mitchell, back after early foul trouble, led the charge as Arkansas missed 12 straight shots. Teague hit the two biggest shots of the night, a pair of 3-pointers to put it out of reach.

Now it's on to the Final Four on Saturday against the Cougars in an all-Texas side of the bracket.

“What we did is history,” Teague said. “I'm really happy for Coach Drew. He's spent a lot of time, dedication, blood, sweat and tears into this program.”

Arkansas had rallied from double-digit deficits twice in the NCAA Tournament and appeared as if it would make it another after its early struggles.

The Razorbacks didn't have enough left against the high-octane Bears, coming up one game short of their first Final Four in 26 years

JD Notae and Davonte Davis had 14 apiece for Arkansas.

“The effort when we got down, we could have hung our heads, but we played really hard,” Arkansas coach Eric Musselman said. “We played extremely hard, but lacked some scoring at times and defensively they hit some tough shots on us.”

The expected fast-twitch South Region final was going to be a drought-ender, just a matter of how long.

The Razorbacks had not clawed this far down the bracket since playing in the 1995 national title game. Musselman has put them in hyper drive during his two seasons, conjuring up the kind of excitement not seen in Fayetteville since the Nolan Richardson “40 Minutes of Hell” days.

Baylor had been in this spot before under Drew, reaching the Elite Eight in 2010 and 2012. That left the Bears short of the Final Four dating back to when the bracket was only eight teams.

The Bears repeatedly beat the Razorbacks off the dribble to lead by 12 barely four minutes in, then on backdoor cuts to stretch it to 18.

“It just showed how focused and ready to play we were,” Drew said. “We got good looks and the guys made them.”

The Mus Bus, just like it had three times before in March, found the right gear to climb out of the hole.

When the head of Baylor's defensive snake went to the bench with about 8 minutes left, Arkansas took advantage by beating the Bears off the dribble and getting to the rim.

The Razorbacks hit 10 of 11 shots during one stretch to pull within 44-38 and were down just eight at halftime despite struggling for a long stretch. They kept Baylor within reach well into the second half before running out of steam.

“I’m not sure why it happens, but it’s really hard to come back, especially from down 18,” said Arkansas guard Jalen Tate. "I didn’t even know we were down that much at one point in the game, but it just shows the resiliency of this group. We almost did it, just weren’t able to tonight.”

Baylor has been adept at forcing teams into trouble and Arkansas had been good at taking care of the ball in the NCAA Tournament.

The Bears won the battle of strengths, scoring 21 points off the Razorbacks' 15 turnovers.

“We had way too many what I would consider unforced turnovers off of outlet passes or trying to throw advanced passes up the floor,” Musselman said.

Mitchell led the top of Baylor's defense, but he was also the orchestrator of the offense, particularly after halftime.

He gave Arkansas all kinds of trouble on the pick-and-roll in the second half, finishing with 12 points and six assists.

“Davion Mitchell is one of the fastest guys I’ve ever guarded, especially this year,” Tate said. “He’s a tough cover. You could tell they’re a completely different team on both sides of the ball.”