Baylor broils No. 3 Razorbacks, ready for even bigger game 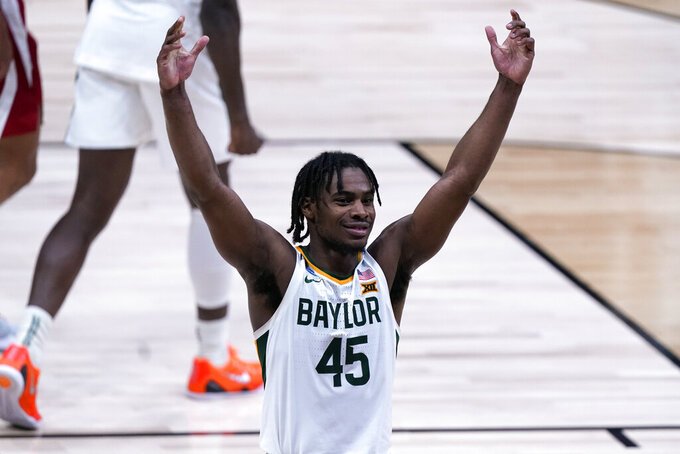 Another contender emerged from the mist at the NCAA Tournament — nothing dramatic, mind you, like in the movies, because we already knew No. 1 seed Baylor was very good.

But so was third-seeded Arkansas. Yet the Bears ran the Razorbacks into the ground early and then again when it got close, posting a comfortable 81-72 win that demonstrated they’re much, much better than good and in the mood for bigger game. They won’t have to wait long.

Baylor faces No. 2 Houston, which nearly blew a 17-point lead before shaking off 11th-seeded Oregon State 67-61, come Saturday for a spot in the national championship game. Cougar fans have until then to revel in the memories of Houston’s great “Phi Slamma Jamma” tournament teams of the early 80s, but they could be in for a rude awakening.

Because this is how Arkansas coach Eric Musselman began his postgame news conference: “Just want to give Baylor a ton of credit. I thought that they played phenomenal tonight, especially offensively.”

Baylor is fast, tenacious, long armed and when everything is clicking, brutally efficient, too. Just nine minutes in, the Bears built an 18-point cushion, playing harassing defense and shooting 68% without turning the ball over once. By half, that was trimmed to 46-38. Arkansas got within four around the 6-minute mark, then got counter-punched with an 8-1 run because that’s what great teams do. They get on top and then figure out how to stay there.

In this case, guard Davion Mitchell’s speedy runs through the Arkansas defense opened up space at the perimeter, which teammate MaCio Teague took full advantage of to nail consecutive 3-pointers and put the game out of reach.

“It just showed how focused and ready to play we were,” said Baylor coach Scott Drew, who took over a scandal-plagued program in 2003 and brought the Bears to the cusp of a Final Four twice before. “We got good looks and the guys made them.”

Not bad timing, either, with overall top seed Gonzaga and the final No. 1, Michigan, expecting to validate their championship credentials against No. 6 USC and No. 11 UCLA, respectively, when the Elite Eight round wraps up Tuesday.

Houston’s win over Oregon State was a different story. Like Baylor, the Cougars came flying out of the gate, rolling to a 34-17 lead at intermission. Then they went cold, shooting a miserable 29% in the second half as the Beavers, improbably, looked set to become the lowest-seeded team to make a Final Four.

But then Houston’s Quentin Grimes punctured that balloon with a 3-pointer with 3:21 left to break a 55-all tie, the Beavers couldn't buy a basket, and the Cougars made enough free throws the rest of the way for a shaky win.

“It was right there within our grasp with the effort we showed in the second half,” Oregon State coach Wayne Tinkle said. “Really proud of this group. We got every single ounce out of them.”

Gonzaga’s Bulldogs, on the other hand, have yet to be pushed anywhere near their limits. They’ve won won 33 straight dating to the 2019-20 season. They’re 29-0 this time around and the last 26 have all been by double-digits. They’ve got NBA Draft lottery talent, a deep bench and like Michigan, and now Baylor, they’ve proven capable of responding every time push comes to shove.

Thus far, the Zags have done it mostly on offense. But what all those high-scoring wins obscure is how good they can defend when they need to. They’ve held opponents below their scoring average in 20 games, including the past six and might be getting even better. Their win against Creighton was the seventh time Gonzaga held an opponent to at least 10 points worse than their average.

“This is not a one-trick pony,” cautioned Bluejays coach Greg McDermott. “These guys can play on both ends of the floor.”