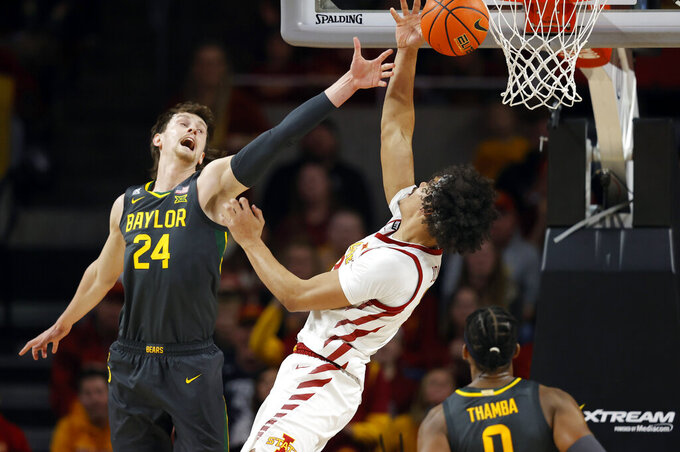 Baylor is the clear choice for No. 1 in The Associated Press men’s college basketball poll. And the voters seem to agree on the group of teams behind the Bears, too.

The reigning national champions kept their firm hold on the top spot Monday, earning all 61 first-place votes for the third time in four weeks. It also marked the second straight week that there were no new teams entering the rankings, with the poll representing another reshuffling of the same group, including an unchanged top seven.

The Bears haven’t done anything to shake voters’ confidence, either. They entered the week as the only team ranked in top five in KenPom’s adjusted efficiency rankings for offense (117.6 points scored per 100 possessions) and defense (87.5).

Baylor (13-0) has won 19 straight games going back to last year’s title run in the Indianapolis bubble. That has included double-digit margins of victory against current No. 10 Michigan State in the title game of the Battle 4 Atlantis in the Bahamas and against No. 19 Villanova.

The Bears won at No. 11 Iowa State on Saturday to open Big 12 play, tenuously holding at least a two-possession lead throughout the second half with a balanced attack, with six players scoring at least nine points.

“It shows we have a great rotation,” Baylor coach Scott Drew said afterward, adding: “Different people step up at different times, and you need that because not everybody has great shooting nights and great games.”

The No. 2 Blue Devils (11-1) remained in place for the fourth straight week behind the Bears. They haven’t played since Dec. 22 after having to postpone last week’s Atlantic Coast Conference games at Clemson and Notre Dame due to COVID-19 protocols.

Duke hosts Georgia Tech on Tuesday night. Coach Mike Krzyzewski sounded optimistic Monday that the Blue Devils would play as scheduled, saying they were awaiting one test result but otherwise expected to have the entire team back together later in the day.

Krzyzewski said it “hit our program extremely hard” while impacting both players and staff, though the retiring Hall of Famer said he hasn’t had the virus himself.

“It went through just about our whole team,” he said. “We’re not in the shape that we have been in before, so it’s going to take time to ramp up.”

Nine teams moved up in the poll, with Providence making the week’s biggest jump of five spots to tie Kentucky at No. 16. No. 15 Alabama jumped four spots, while No. 14 Texas and Villanova each rose three spots.

The Big 12 and Southeastern conferences each had five ranked teams to lead the country, followed by the Big Ten and Big East with four each.

The Pac-12 had three, then four leagues — the ACC, West Coast, American Athletic and Mountain West — each had one.