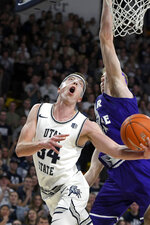 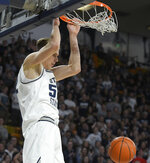 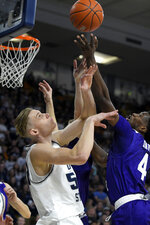 LOGAN, Utah (AP) — Utah State had no trouble turning a normally close rivalry game with Weber State into a blowout.

The No. 17 Aggies put together one of their best defensive performances in several seasons on their way to beating the Wildcats 89-34 on Friday night. Weber State committed 19 turnovers and shot just 21.7% from the floor.

The Wildcats' 34 points were the fewest Utah State allowed an opponent to score since holding San Jose State to 33 points on December 31, 2014. And the Aggies 55-point margin of victory was the most against a Division I opponent since defeating Cal-State Fullerton 115-60 on December 23, 1972.

"Our defense led to so many easy buckets," junior guard Abel Porter said. "This team plays really well with momentum. Our home crowd is so good at just keeping the energy. Once we got the ball rolling, it really didn't stop."

The Aggies (2-0) beat the Wildcats for the second straight season.

Donatas Kupsas scored 10 points to lead the Wildcats. Weber State (0-1) had the lowest shooting percentage for a Utah State opponent since Alabama State shot 21% from the field against the Aggies on December 15, 2018.

"We were really gritty," Bean said. "Hats off to those guys. I thought they were really physical. But we knew we had a job to do and we executed really well offensively."

Each team played without its top player. Utah State center Neemia Queta was sidelined for a second straight game while continuing to rehab a knee injury. Weber State guard Jerrick Harding, the team's leading scorer a season ago, sat out with a foot injury.

Things spiraled out control for Weber State a few minutes into the game.

After taking a 6-4 lead on a 3-pointer by Israel Barnes, the Wildcats went 11 ½ minutes without making a basket. Weber State missed 10 straight shots and turned the ball over seven times in that stretch.

"We forgot to move the ball," senior guard Cody John said. "We forgot our defensive principles. But at the end of the day we were playing hard and we're just going to get better."

That allowed Utah State to pull away, and the Aggies did it in commanding fashion.

The Aggies used a 20-2 run — capped by a second-chance dunk by Kuba Karwowski — to race to a 24-8 lead. After Kupsas hit a 3-pointer to break Weber State's lengthy shooting drought, Utah State mounted another overwhelming run before halftime.

Merrill drained a 3-pointer and Bean converted traditional three-point plays over three straight possessions to spark a 27-2 run by the Aggies. Merrill capped the run with another 3-pointer on Utah State's first possession of the second half, giving the Aggies a 51-13 lead.

"To hold them to 13 points is incredibly difficult to do, but our guys were really locked in," Utah State coach Craig Smith said.

Bean wore a protective mask on Friday after taking an elbow to the face on Tuesday during Utah State's 81-73 win over Montana State. An oral surgeon operated on him after the game to fix his two front teeth. Bean was also fitted with braces. Ironically, he wore braces during all four years in high school.

It is Bean's second facial injury of the season. Teammate Klay Stall accidentally elbowed him in the face a month ago and broke Bean's nose.

"It seems like I've been taking a lot of elbows recently," Bean said. "I suggested just bubble wrapping my face. We'll see what happens."

Porter's 10 assists represented a career-high for the former walk-on. He was the first Utah State player to have double-digit assists in a game since Merrill had 12 against Air Force in January.

"The dude is just a winner," Smith said. "I don't know how else to describe him. He just wins."

Weber State: Without their leading scorer, the Wildcats were rudderless on offense. They shot just 10 of 46 from the field and endured a flurry of turnovers that contributed to the blowout.

Utah State: Relentless defensive pressure and crashing the boards helped the Aggies run away from the Wildcats before halftime. Utah State ultimately finished with a 44-27 advantage on rebounds and forced 19 turnovers. The Aggies outscored Weber State 48-8 in the paint, 19-4 in second-chance points, and 23-1 in points off turnovers.