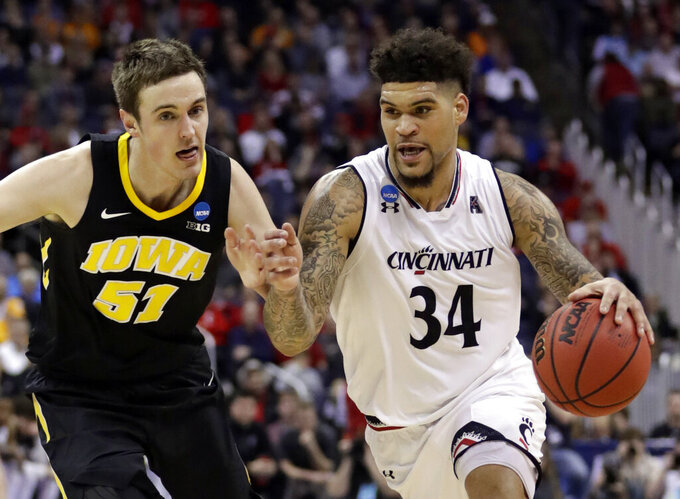 FILE - This March 22, 2019, file photo shows Cincinnati's Jarron Cumberland (34) driving past Iowa's Nicholas Baer (51) in the first half during a first round men's college basketball game in the NCAA Tournament in Columbus, Ohio. Mick Cronin left for UCLA, and Cincinnati turned to a familiar local coach, John Brannen, as his replacement. The Bearcats are undergoing significant changes in his first season. (AP Photo/Tony Dejak, File)

CINCINNATI (AP) — Mick Cronin took his defensive-oriented style to UCLA , trying to resurrect a storied program with his emphasis on rebounding and defensive deflections. There's been a lot of change in what he left behind in Cincinnati.

The Bearcats are moving at a much different pace under their new coach.

"It's very different for our returners, and it's new for our other guys," first-year coach John Brannen said. "It's a whole new system for everything."

When the Bearcats searched for Cronin's replacement, they didn't look very far or take very long. Brannen was very familiar to Cincinnati after coaching just across the Ohio River at Northern Kentucky, where he reached the NCAA Tournament twice in the last three years. Cincinnati shared Northern Kentucky's arena while its on-campus facility was renovated in 2017-18, giving the Bearcats a familiarity with Brannen's ways.

One of the most attractive characteristics: Brannen's Northern Kentucky teams were exciting to watch. And Cincinnati was looking for a change in style.

They've gotten it. Now, they have to adjust to it.

The Bearcats went 28-7 last season and 14-4 in the American Athletic Conference, finishing second to Houston in the regular season. They won the conference tournament for the second year in a row, and then fell to Iowa in the first round of the NCAA Tournament in nearby Columbus, Ohio.

They return their best player in senior guard Jarron Cumberland — the AAC's player of the year — along with two other starters. The Bearcats' biggest challenge initially is learning a very different style that emphasizes pushing the ball up the court and taking the first good shot.

"It feels a lot better, getting the style and pace he wants — we're understanding it now," Cumberland said.

How quickly they catch on — and how Brannen is able to use a roster that's thin on experience — will determine their shot at ending a run of NCAA Tournament disappointment. The Bearcats haven't made it past the second round since 2012.

"We have something to prove," Cumberland said. "We haven't done anything yet."

Cumberland is aware he could wind up among the school's best, who are honored on the wall of the Bearcats' practice gym.

Senior forward Trevon Scott (9.3 points, 6.9 rebounds) and junior guard Keith Williams (9.9, points, 3.2 rebounds) are the other two returning starters. Scott was among the AAC's best in offensive rebounds. Williams scored in double figures 19 times and is known for his shot blocking.

McNeal is in a group of three graduate transfers and one junior transfer — 7-foot-1 center Chris Vogt from Northern Kentucky — recruited by Brannen to fill out a roster depleted by transfers after Cronin left.

The Bearcats get a good test right away, opening at No. 18 Ohio State. Last year, the Buckeyes made the trip to Cincinnati to help the Bearcats reopen their renovated arena and spoiled their moment, beating them 56-54. Cincinnati plays at crosstown rival Xavier, ranked No. 19, on Dec. 7.