Been there, done that: Experienced teams fill the Final Four 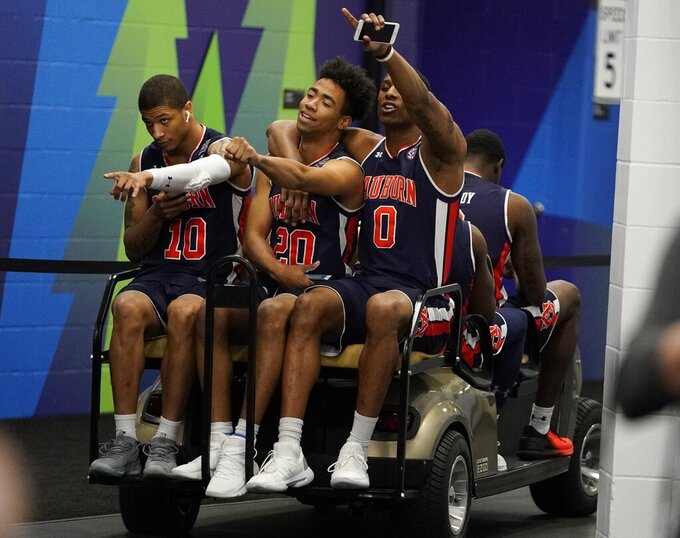 MINNEAPOLIS (AP) — Zion Williamson is not here. Neither is R.J. Barrett or the rest of Duke's freshmen.

North Carolina's Coby White? Knocked out in the Sweet 16. So was LSU's Tremont Waters. Those Kentucky kids, all done by the Elite Eight.

For the hype about college basketball's fantastic freshmen this season, none made it to the Final Four.

The one and dones are done.

It's a veterans weekend in Minneapolis.

"It's funny. Everybody would like to have what Duke and Kentucky have as far as personnel," Michigan State coach Tom Izzo said. "Both of them have had incredible years, but experience does matter too. Somewhere there's probably a happy medium. If you don't have the best talent, you'd better be very old and very experienced."

Virginia is loaded with players from last year's first-round NCAA Tournament loss to No. 16 seed Baltimore-Maryland Country, motivated to make a different kind of history. Point guard Kihei Clark is the Cavaliers' only freshman in the regular rotation.

Aaron Henry and Gabe Brown had huge games in Michigan State's Sweet 16 win over LSU, but juniors Cassius Winston and Nick Ward with sophomore Xavier Tillman are the leaders who have been through the NCAA Tournament grind before.

Auburn has no freshmen in its rotation and is led by senior Bryce Brown and junior Jared Harper. Sophomore Chuma Okeke was a key cog, too, before he tore his left ACL in the Sweet 16.

All three played last year while leading the program to its first NCAA Tournament trip since 2003. The Tigers were crushed by Clemson in the second round, but the experience helped them understand what to expect and advance in this year's bracket.

"The reason sometimes some of the kids that are coming in as freshmen haven't been able to advance past a certain round and not get to the Final Four, win a national championship, is because they don't have the experience of having not gotten there," Auburn coach Bruce Pearl said. "That experience we had a year ago of not being able to advance through the tournament helped us as well."

Most coaches would love to have the one-and-done players. Only a small percentage have a shot, forcing those who don't to seek players with fewer stars coming out of high school.

They may end up with players who won't immediately head to the NBA, but it can have other advantages.

Having players for multiple seasons breeds continuity. Returning players already know the coaches' expectations, the offensive and defensive systems, the grind of the season. They develop a cohesiveness with each other on the court, knowing what the other is going to do even before they do it.

By the time they reach the NCAA Tournament, the muscle and memory is so ingrained they can just go out and play, not think about where they are or what they have to do.

"Our formula has always been ... how can you build a program that can compete against the best in your conference?" Virginia coach Tony Bennett said. "And it was to get guys experienced, get them to where they have two or three years where they learn and maybe learn the hard way. And then when they get to be upperclassmen, they're ready to play the best."

The cliche says defense wins championships. More often than not, experience does the trick even better.

Villanova won two of the past three national championships with veteran-laden teams. North Carolina was led by upperclassmen in its 2017 title run. Connecticut's top five scorers were upperclassmen on its 2014 championship team, including senior Shabazz Napier, who learned from Kemba Walker three years earlier as a freshman.

Carmelo Anthony did it at Syracuse in 2003. Anthony Davis dominated while leading a young Kentucky team to the 2012 national title. Freshmen Jahlil Okafor, Justise Winslow and Tyus Jones were keys when Duke set off the confetti canons in 2015.

"It helps knowing what to expect and how guys play with each other," Auburn senior Malik Dunbar said. "We won't be intimidated by the big stage. We want to win and do it again."

The Tigers certainly have the right mix. Of course, so do the other three Final Four teams.