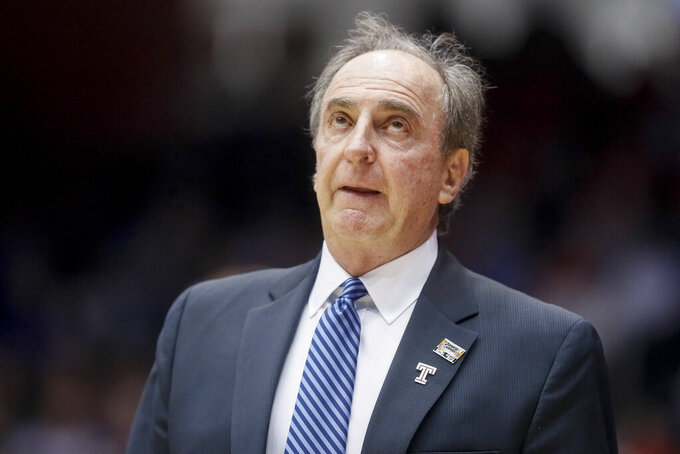 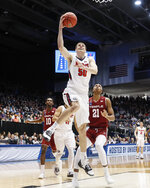 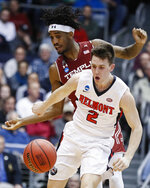 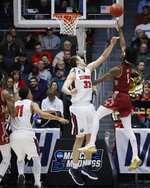 DAYTON, Ohio (AP) — A few seconds were still left on the clock when Fran Dunphy headed to midcourt for his final postgame handshake, the outcome long decided. Belmont was simply too much for his Owls.

Nobody else in the NCAA Tournament is excited to face their efficient offense, either.

Kevin McClain scored 29 points and led the decisive second-half run as Belmont got its first NCAA Tournament win, pulling away to an 81-70 victory Tuesday night and ending Dunphy's career in the First Four.

The 11th-seeded Bruins (27-5) play Maryland on Thursday in the East Region.

"We belong in this tournament," said McClain, who finished two points shy of his career high. "You can see that."

Belmont got an at-large bid after losing to Murray State in the Ohio Valley Conference Tournament title game. The Bruins showed the selection committee's faith was not misplaced, getting the breakthrough win on their eighth try.

"I think that they can play in this atmosphere and this is important," coach Rick Byrd said. "I didn't think many times we played well, or knew what we were in offensively, but they found a way to win. And you never play perfect, and I think they've got some toughness about them."

The loss sent Temple (23-10) into a transition. Dunphy is retiring after his 13th season at Temple, where he replaced John Chaney. Dunphy previously coached 17 seasons at Penn.

"The game of basketball has given me way more than I have given to it," Dunphy said.

He was hoping to coach another day, but Belmont's high-scoring offense pulled away at the end. Senior guard Shizz Alston Jr. led the Owls with 21 points.

"That team is smart," Alston said. "They only do what they're good at."

The Bruins entered the tournament second in the nation at 87.4 points per game. The Owls' aim was to slow the high-percentage offense just enough to give themselves a chance. Temple hung in during a first half that featured five lead changes and ended with Belmont ahead 37-31.

The Bruins pushed their lead to 11 points by hitting their first two shots in the second half. Alston, who led the American Athletic Conference at 19.7 points per game, hit three 3-pointers as the Owls surged ahead 50-46. Alston has been the Owls' catalyst, scoring at least 20 points in each of his last nine games.

McClain led a 16-3 run that put Belmont ahead to stay. McClain finished two points shy of his career high.

The Bruins' balanced offense had more than enough even though leading scorer Dylan Windler was held to five points on 2-of-7 shooting, matching his season low. Windler came in averaging 21.4 points.

Temple: Former Owls star Aaron McKie takes over for Dunphy. McKie is an assistant on Dunphy's staff. The Owls haven't won an NCAA Tournament game since 2013, when they beat N.C. State at Dayton before losing in the second round. They went 2-8 in eight appearances under Dunphy.

Belmont: The Bruins got only the second at-large NCAA Tournament bid in Ohio Valley Conference history, along with Middle Tennessee in 1987. They'd dropped their seven appearances when they had automatic bids.

Temple's last NCAA Tournament win was in 2013 over N.C. State in Dayton. The Owls are 33-33 all-time in the tournament.

Belmont is making its eighth NCAA appearance since 2006. Its closest previous brush with a victory was a one-point loss to Duke in 2008.

Six-foot-11 freshman center Nick Muszynski missed the OVC title game with a sprained left ankle, injured the previous game. Muszynski, whose nickname is Moose, started Tuesday and had 16 points and four rebounds. He wore a protective boot after the game.

"I thought he played terrific," Byrd said. "We just didn't know what we were going to get. Frankly, yesterday in practice he didn't look very good at all. But he really showed a lot today."

The crowd at University of Dayton Arena was 11,874, the second-largest Belmont has played in front of this season. The high was 14,804 at Mackey Arena on Dec. 29, when Belmont lost to Purdue 73-62.

Belmont heads to Jacksonville, Florida, for its game against Maryland.