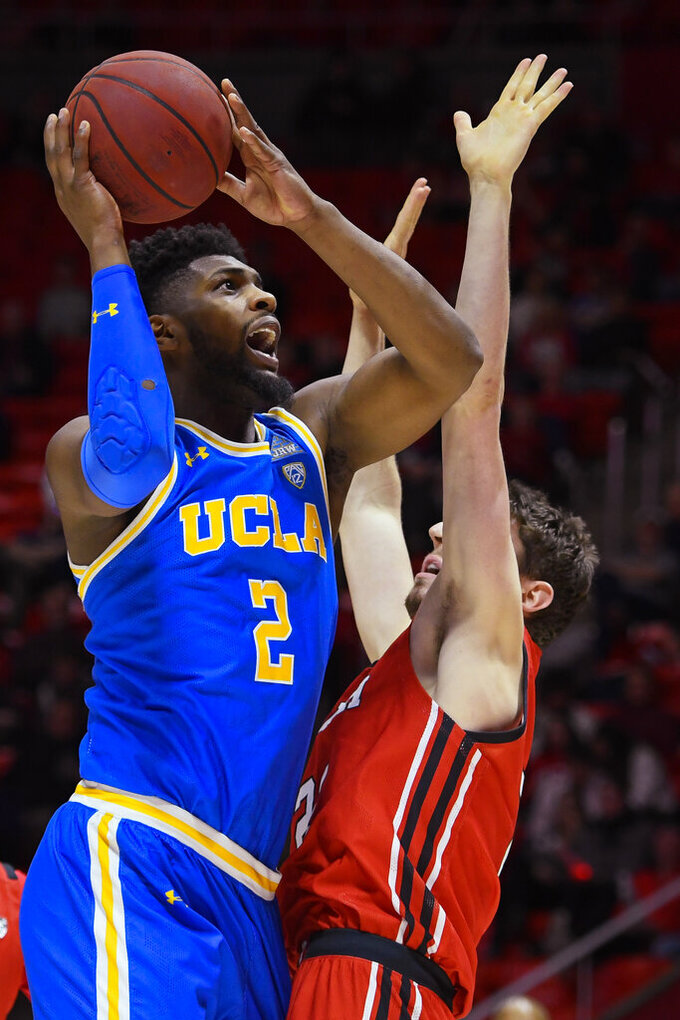 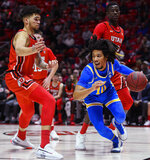 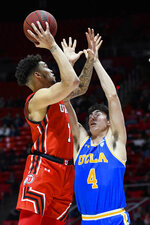 UCLA coach Mick Cronin has been drilling this mantra into his team since he arrived in Westwood and his players are responding.

“Defensively, we couldn't have played much better,” Cronin said after his Bruins beat Utah 69-58 on Thursday night.

Jules Bernard scored 14 of his 16 points in the first half as UCLA Bruins staked an early lead.

“We were really tuned into the defensive plan and we were just playing physical,” said Bernard, who believes that good defense leads to offensive opportunities.

“I got a steal and a dunk so that got my juices flowing. Then I got a wide-open shot off a great pass from Cody Riley. After that, I was just in the flow,” he said.

Tyger Campbell had 13 points and steadied the Bruins when the Utes made a couple runs. Chris Smith, David Singleton and Jaime Jaquez each had nine for the Bruins, who have won eight of 10.

“We're getting more confident, more comfortable. Knowing we have our defense to fall back on, that gives us a sort of comfortability,” Bernard said.

Alfonso Plummer scored 16 points off the bench, Timmy Allen had 11 points while Branden Carlson scored 10 before fouling out in just 13 minutes of action for the Utes, who dropped to 10-2 at home.

“A this point it might be time to shake a few things up,” Utah coach Larry Krystkowiak said. “We just need to get a little dirty and nasty from time to time. Everybody needs to stay connected and I trust that there’ll be some changes. It’s not a threat, but something that needs to be evaluated.”

“We got good shots and we weren't forcing anything. We were getting open shots and letting the game come to us,” Campbell said.

The Utes (14-12, 5-9 Pac-12) began pressing full court and trimmed the lead to single digits in the final two minutes but couldn't make enough long-range shots -- Utah was 3 for 12 from 3-point range -- to truly threaten.

UCLA is now 15-0 this season when limiting the opposition to 73 points or fewer and remain within striking distance of the logjam at the top of the conference.

The Bruins set the tone early by making seven of its first eight shots and never trailing.

“Jules Bernard was a key to the win tonight. We had guys with fouls and when that happened Jules took over. Not only on offense, but his defense was tremendous all night,” Cronin said.

GUARD THE ARC AND CLOG THE PAINT

UCLA has turned their season around by stopping the way offenses flowed freely on the Bruins early in the season. The key, say the team, is being able to defend in the interior.

“Our interior defense, being able to play better one-on-one defense, forces six-to-eight-foot contested shots and then we don't need to help off 3-point shooters,” Cronin said.

“We haven't changed anything. We are just playing better and putting in more effort,” Singleton said.

The focus and intensity shows Cronin that they have finally found an identity.

“We've slowly changed our DNA. We are a defensive team now and that's how we win,” he said.

As poorly as the Utes have performed away from Salt Lake City, they have been potent at home. Against the Bruins switching defense, they couldn't find a rhythm and had 16 turnovers. They even had one of four shot clock violations out of a timeout.

Carlson was in foul trouble throughout the game and Kryskowiak was arguing with the officials all game long. He was whistled for a technical foul with 4:31 left in the first half and tip-toed around the topic of officiating in his post-game press conference since he has already been reprimanded by the Pac-12 Conference this season.

UCLA: The Bruins are peaking at the right time even though they struggled with turning the ball over (19) when the Utes applied pressure. The Bruins ran a deliberate offense against Utah's matchup zone and got high-percentage shots and then bolstered the attack with 11 offensive rebounds.

Utah: Carlson scored eight points early and supplied the Utah offense with a genuine low-post threat but once he sat with two fouls, the Utes struggled to get decent looks. As has happened throughout the year, the Utes had another long drought as almost eight minutes of the first half without a field goal.