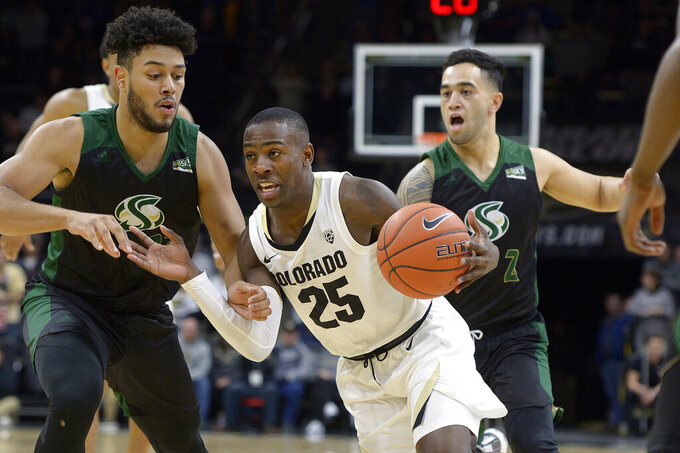 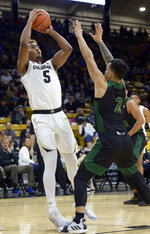 BOULDER, Colo. (AP) — Colorado coach Tad Boyle accused his 21st-ranked Buffaloes of playing to the crowd, sparse though it was.

“The epitome of winning ugly,” Boyle said after the Buffaloes improved to 6-0 by fending off scrappy Sacramento State 59-45 on Saturday night at the half-empty UC Events Center thanks to Tyler Bey’s 11 points and 17 rebounds.

That has to change, he said, “because we can’t beat the teams that we want to beat on our schedule as we move forward playing like that on the offensive end. Ten assists and 19 turnovers isn’t going to cut it.”

The Hornets (4-1) were within striking distance of the Buffs (6-0) at 45-40 when their leading scorer, Joshua Patton, made his only basket of the night with just over four minutes remaining.

“Yeah, we did have a shot,” Patton said. “We didn’t capitalize on it.”

Patton picked up his fifth foul about 20 seconds after his only basket and took a seat with just 4 points, 14.5 below his average, on 1-of-8 shooting.

Shane Gatling sank both free throws. Even Battey (11 points) followed with two quick baskets to make it 51-40. The first one, a finger roll, came at 3:16 and was the Buffs' first field goal in 7 1/2 minutes.

“There’s no excuse for the way we played tonight,” said McKinley Wright IV, who added 10 points for Colorado, which closed the game on a 14-5 run, the Buffaloes’ only dominant stretch of the night.

“We (stunk) in the first half. We (stunk) the whole game,” Wright said. “Nineteen turnovers is terrible. But we got a win, so nothing to be made about. But we have to do better.”

Boyle said on the Pac-12 Network's pregame show that he was worried the Buffs, who were coming off a big win over Clemson to claim the MGM Resorts Main Event Championship in Las Vegas, would have a "turkey hangover."

Sure enough, the Buffs came out lethargic, plodding their way to a 24-16 halftime lead. They did hold Patton scoreless, however, thanks to a thunderous block by Lucas Siewert when Patton was going up for a breakaway basket.

The arena might have been rocking at that point, but a trio of factors combined to keep most seats empty. The Buffaloes’ football team was playing at Utah at the same time; students were off for Thanksgiving break; and nasty weather kept a lot of people home as strong winds whipped up the foot of snow on the ground.

Sacramento State: The Hornets, led by Ethan Esposito’s 12 points, gave it the Buffs a good run but they needed the usual production from Patton to really have a shot at the stunner. “It’s always disappointing when you get a loss, especially against a team like this that’s ranked 21 in the nation,” Patton said. “You’re over here playing them well at their place, playing good defense, but sometimes the ball just doesn’t go your way.”

Colorado: The Buffaloes committed too many turnovers and missed too many free throws — nine — but they outrebounded the Hornets by nine and came through in the clutch.

This one may have been ugly but it was a pretty good test and the Buffs passed it with another double-digit victory for the 12th 6-0 start in program history.

Colorado: The Buffaloes host Loyola Marymount on Wednesday night before a big trip to Kansas to face the fourth-ranked Jayhawks on Wednesday night. “I’m sure every player thinks about it a little bit,” Wright said. “But our job is business against Loyola Marymount. There are teams around the country who lose on their home floor. We don’t want that to be us. So, we have to take care of home first and then think about the Kansas game.”