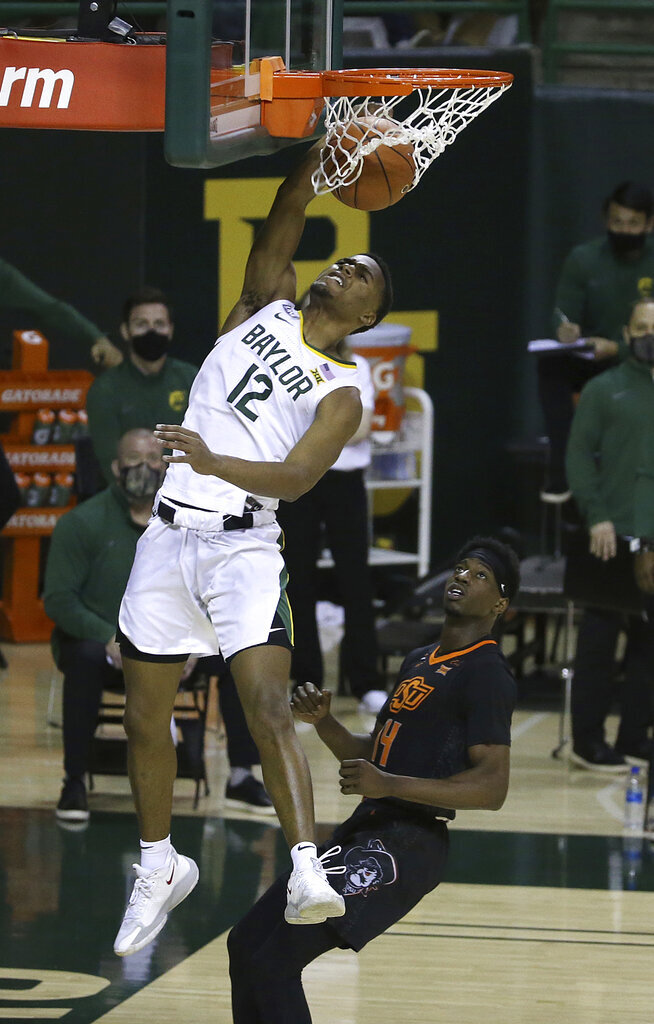 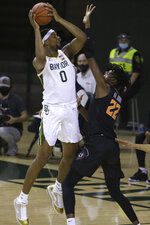 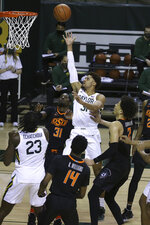 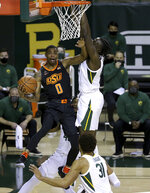 WACO, Texas (AP) — Jared Butler and No. 3 Baylor certainly seem to be getting their legs back after a three-week stretch when the Bears couldn't play any games games because of COVID-19 issues in the program.

Two days after the Bears clinched their first Big 12 title with an overtime win at No. 6 West Virginia, Butler had two impressive dunks while scoring 22 points in an 81-70 victory over No. 17 Oklahoma State on Thursday night, ending the Cowboys' five-game winning streak.

“We're overcoming the COVID assault against us," Butler said.

Baylor (20-1, 12-1 Big 12) played its fourth game in 10 days since returning to action and was home after securing its first league title since 1950 in the Southwest Conference.

“You want to be content with winning the Big 12, but at the same time you don’t want to lose a game,” Butler said. “It’s a hard line to maneuver in.”

Matthew Mayer and MaCio Teague both added 19 points for the Bears, and Davion Mitchell had 12. Mayer had two baskets in a 9-0 run midway through the first half that put them ahead to stay.

Freshman standout and Big 12 leading scorer Cade Cunningham had 20 of his 24 points after halftime for Oklahoma State (17-7, 10-7), whose winning streak was the longest active in the Big 12. The last three wins had been against Top 25 teams, including over Bedlam rival No. 16 Oklahoma twice in three days.

Cunningham, considered by most as the potential No. 1 overall NBA draft pick, was moving gingerly when he left the court with help in the final minute after colliding with Mitchell, who was called for the foul — before Oklahoma State was in the bonus. Cunningham didn't return to the game but was able to walk off the court afterward without any assistance.

“It happened right in front of me there. I didn’t see anything unusual other than stepping on a guy’s foot,” Oklahoma State coach Mike Boynton said.

Boynton said his first and foremost concern was Cunningham's future. After initially saying it didn't seem that serious, the coach added that he wasn't a doctor and didn't want to give any information either way until after a medical evaluation.

Teague missed a free throw for Baylor with 5:43 left, but Cunningham then had a turnover. Jonathan Tchamwa Tchatchoua got the steal, then Butler passed to Teague, who weaved through traffic inside for a layup. Teague then had a steal that led to a 3-pointer by Butler that pushed the lead to 69-60 with five minutes left.

Butler had a breakaway slam earlier in the second half after another Teague steal from Cunningham.

The Bears never trailed after a dunk by Tchamwa Tchatchoua put them up 16-15 with 13 minutes left in the first half.

“Being able to refocus and compete against maybe the hottest team in conference ... really proud of our guys, player-led team,” Drew said. “They came out focused and really did a great job in making sure we got the win tonight.”

“Say we cut them in half, it’s a different kind of ball game,” said Kalib Boone, who had 10 points.

Baylor: In their first game back Feb. 23, the Bears had to rally in the second half for a 77-72 home win over Iowa State, which is still winless in the Big 12. Baylor then lost by 13 at No. 13 Kansas on Saturday night.

"I don’t think we’re all the way back. I think the West Virginia game gave us a little more stamina, like a workout almost. It got us back to playing hard,” Butler said. “Iowa State, my legs were gone about the 12-minute mark of the second half. West Virginia, my legs were gone as soon as I fouled out (in OT). Tonight we’re stretching out a little more. I think we’re back to about 75 (percent)."

After only three 20-win seasons in its first 100 seasons of basketball, Baylor reached 20 wins for the 12th time in the past 14 seasons. ... Baylor is 10-0 in the Ferrell Center with one home game remaining. The last time the Bears were undefeated at home was when they were 9-0 in 1947-48.

“We have a checklist of things we want to accomplish this season, and one of them is to go undefeated at home. ... This would be a great opportunity,” Mayer said. “We want to leave a legacy as the best team Baylor has ever had."

Baylor is home against No. 18 Texas Tech on Sunday.

By Jeff Wallner just now
By Al Lesar 24 minutes ago
By Gary B. Graves an hour ago
3 hrs ago
4 hrs ago