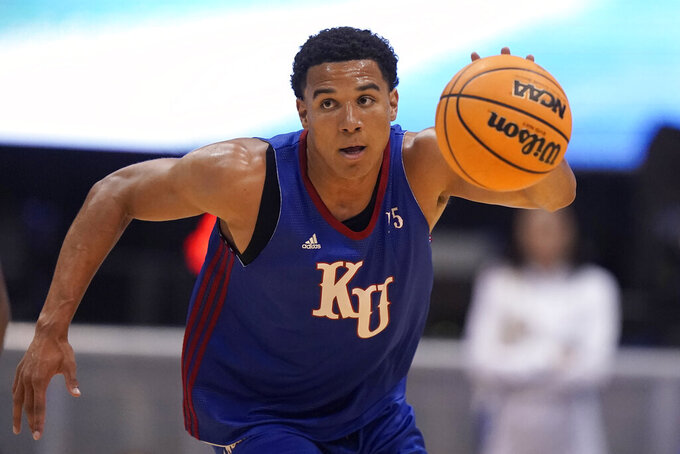 KANSAS CITY, Mo. (AP) — Just about every game in the Big 12 this men's basketball season will feel like a reunion.

On the coaching front, there already was Mark Adams entering his second year at Texas Tech, where he replaced Chris Beard, who headed off to Texas, his alma mater. And there's Jerome Tang, who spent most of the past two decades alongside Scott Drew at Baylor and now is wearing purple and white for Kansas State.

Then there’s the familiarity among certain players.

The Big 12 followed the lead of other conferences last year when it scrapped rules making it almost impossible to transfer to another conference school. And now, more than a handful of players that called one Big 12 school home seven months ago will be doing their best to beat that school when this season tips off.

“The transfer within the league, it's not ideal,” TCU coach Jamie Dixon acknowledged Wednesday, "but there was no way they were going to make a rule that guys can transfer and play right away everywhere but your conference.

“Kids pick the conference they want to play in as much as the school they want to go to,” he added. “It's a little strange but it's not the end of the world. We'll survive."

Easy to say when you're the beneficiary. Dixon landed Oklahoma State guard Rondel Walker, who appeared in 59 games for the Cowboys the past two seasons, and who gives the No. 14 Horned Frogs some much-needed backcourt help.

West Virginia lost Jalen Bridges, who played in 61 games during two seasons in Morgantown, to fifth-ranked Baylor, only to land Texas transfer Tre Mitchell, who started 17 of 24 games for the Longhorns last season.

The No. 12 Longhorns also added where they subtracted, landing perhaps the top Division I transfer available in Tyrese Hunter, who averaged 11 points and nearly five assists while starting every game as a freshman at Iowa State.

Then there is Texas Tech, which lost third-leading scorer Kevin McCullar to defending national champion Kansas, only to land Jaylon Tyson, who appeared in eight games as a freshman at Texas. And for good measure, the Red Raiders also landed De'Vion Harmon, who played two seasons at Oklahoma before spending last season at Oregon.

“It was just time for me, you know? Time for me to grow,” explained McCullar, who played 44 of a possible 50 minutes in a double-overtime loss to the Jayhawks last season, along with 33 of 40 minutes in a loss in the Big 12 Tournament.

“Coach Self, he has a good reputation, as you know, for getting guys to the next level," he said. "And you know, his plan for me, and for playing in the biggest stage and the biggest games you can, that's going to be great for me.”

The transfer portal has spawned a new era in college basketball, where teams are not built over time so much as pieced together each year. But the movement within a conference is a relatively new phenomenon, and the fact that so many big names moved to traditional rivals in one offseason within the Big 12 is nearly unprecedented.

Along with some potentially awkward reunions, the transfers create a whole new layer of complexity when it comes to scouting and preparation; those players will no doubt have an intimate understanding of their old systems.

Besides, coaches clearly have no problem moving within the conference.

Fifteen years ago, Bob Huggins bounced after one season at Kansas State for West Virginia, his alma mater. Beard also headed home when, coming off a five-year run at Texas Tech that included an appearance in the national title game, the Longhorns came calling. Now Tang will have to face his old employer when the Wildcats visit Baylor.

“He's been more than ready for a long time. He just didn't feel the calling to go,” Bears coach Scott Drew said. "He's great with the community. Great for the school. He's a great teammate — he cheers so hard and loud for other sports. He's done a remarkable job everywhere he's been, and Baylor wouldn't have had the success it had without him.

Then, in what will no doubt be a common feeling among players and coaches across the Big 12 this season, Drew added: “I know know one is going to cheer louder for him than I will, except when we play.”