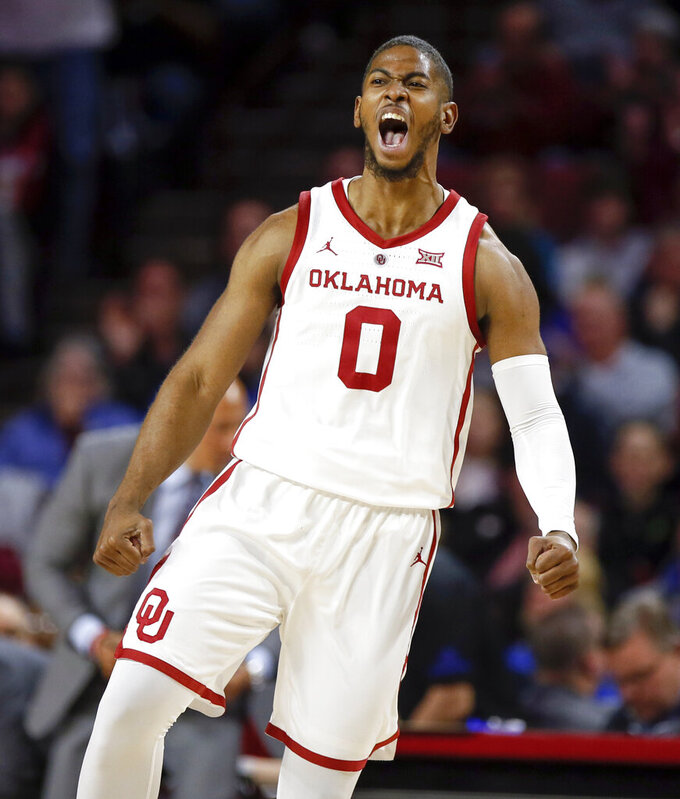 Oklahoma guard Christian James (0) reacts after making a 3-point shot in the first half of an NCAA college basketball game against Kansas in Norman, Okla., Tuesday, March 5, 2019. (AP Photo/Nate Billings) 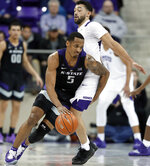 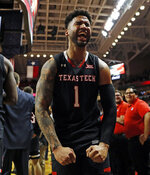 GAMES OF THE WEEKEND: Texas Tech at Iowa State; Oklahoma at Kansas State. With Kansas out of the picture for the first time in 15 years, the Big 12 title race will come down to K-State and Texas Tech. If the Wildcats (23-7, 13-4) and Red Raiders (25-5, 13-4) both win on Saturday, they'll share the crown. The same holds true if they lose, because the Jayhawks (22-8, 11-6) are guaranteed to finish at least one loss behind them. Tech might have the tougher task ahead, because the Cyclones will be looking to close a strangely disappointing home season on a high note. But the Sooners led by as many as 24 points in pounding Kansas on Tuesday night, and a win in Manhattan with so much at stake might be worth an NCAA Tournament seed line for them.

LOOKING AHEAD: The Jayhawks host Baylor in the regular-season finale at Phog Allen Fieldhouse. The Bears will be looking to solidify their postseason resume. ... Texas hosts TCU in what could prove to be an elimination game for an at-large bid — although strong runs in next week's conference tournament by either the Longhorns or Horned Frogs could bolster those hopes. ... West Virginia and Oklahoma State close out highly disappointing regular seasons in Stillwater.

PLAYERS TO WATCH: Jarrett Culver of Texas Tech; Barry Brown Jr. of Kansas State. KU's Dedric Lawson is in line to win the Big 12 scoring and rebounding titles. But will the voters name a Jayhawk who wasn't part of a championship team for the first time since 2004 the Big 12 player of the year? Culver, who is averaging 17.9 points, 6.4 rebounds and 3.7 assists, and Brown (15.1 points a game and a league-high 60 steals) have been the catalysts for their teams' rise to the top of the league. A big day with a league championship on the line might push either of them over the top for top honors.

INSIDE THE NUMBERS: In retrospect, losing Udoka Azubuike (hand injury) and Lagerald Vick (leave of absence) proved to be the Jayhawks' downfall. Azubuike was averaging 13.4 points, 6.8 rebounds and 1.6 blocks before he got hurt, and Vick was at 14.1 points a game on a team-high 45.5 percent from 3-point range. Heralded freshman Quentin Grimes also struggled to fill the void left by departed first-team All-American Devonte Graham. Grimes has committed 59 turnovers with just 55 assists, and he scored just three points on Tuesday with KU's streak on the line.

ON WOMEN'S SIDE: Top-ranked Baylor was just the sixth Big 12 team to finish the league year unbeaten. The Lady Bears, who are on pace to be the top seed in the upcoming NCAA Tournament, will face the Oklahoma-Texas Tech winner in the quarterfinals of the Big 12 tournament on Saturday. Second-seeded Iowa State will likely be the only other league team to host first- and second-round NCAA Tournament games — provided the Cyclones don't slip up in the quarterfinals.