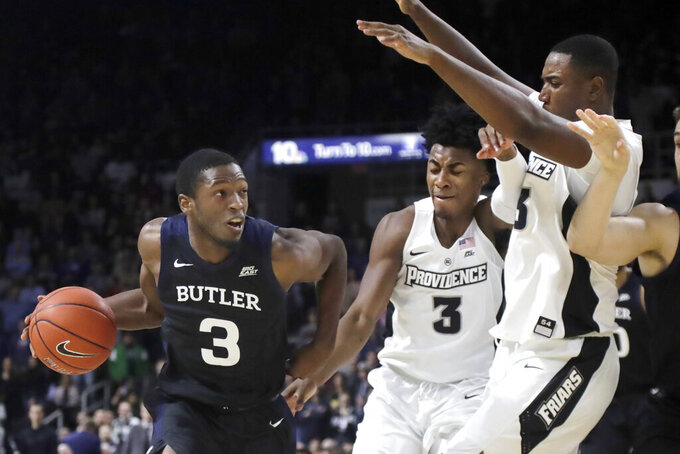 It has been a long time since the Big East commanded the spotlight like it does in college basketball these days.

In fact, you probably have to go back about seven years to the days before conference realignment, when Bob Huggins was stalking the sidelines at West Virginia, Rick Pitino was leading Louisville, and the conference tournament at Madison Square Garden might as well have been a proving ground for national championship hopefuls.

Those high-profile schools and others are gone, of course. They've been replaced by such schools as Butler and Creighton and Xavier. But wouldn't you know it? They are a big part of why the Big East is a beast once again.

The Bulldogs moved into fifth in the latest AP poll this week, climbing one spot after another perfect week. Perennial contender Villanova resides at No. 14, four spots ahead of Seton Hall, while the Bluejays moved into the poll at No. 25 to give the plucky Big East four ranked teams — more than the Atlantic Coast, Pac-12 and Southeastern conferences.

“This league is a grind,” said Creighton coach Greg McDermott, whose team knocked off Xavier over the weekend. “We lost two games in a row against a very good Butler team an a very good Villanova team and then you have a very good Xavier team waiting on the other side of that. I think it's very important you have the maturity and focus to understand when you lose a couple games in this league, you can't throw everything out the window and try something else.”

Expect more of the Big East's best teams to trade haymakers this week.

The fireworks begin in earnest on Wednesday night, when Butler (15-1, 3-0) welcomes Seton Hall to Hinkle Fieldhouse. The Bulldogs' lone loss remains a one-point setback against Baylor, a team that merely beat Texas Tech and Kansas on the road last week to climb to No. 2 in the nation. The Pirates (12-4, 2-0) have found their stride and won six straight.

There are only two unbeaten teams left in major college basketball and both should stay that way. Fourth-ranked Auburn (15-0) plays rival Alabama on Wednesday night before a trip to Florida on Saturday, and seventh-ranked San Diego State has lowly Fresno State on Tuesday night before a visit from Nevada this weekend.

The Aztecs are off to their best start since the 2010-11 season, when Kawhi Leonard led them to a 20-0 start and the No. 4 ranking. They wound up with a 6-seed in the NCAA Tournament and advanced to the Sweet 16.

Kansas will be trying to bounce back from its first home loss to Baylor — ever — when it visits Oklahoma on Tuesday night. There is also a big game in Morgantown, where No. 12 West Virginia plays red-hot TCU the same night.

Making things tougher on the Jayhawks? Star guard Devon Dotson is dealing with a hip pointer.

The Bears, meanwhile, haven't lost since playing Washington in Alaska in their second game of the season. They hope to continue that roll against Iowa State on Wednesday night, then with a trip to Oklahoma State on Saturday.

"Any other team would say, 'Oh, we got one at Kansas.' But we expected to win," said Bears guard Jared Butler, who led the way Saturday with 22 points. “We have a great team with great guys and great coaches. Our defense determines how we play. If we play defense, we're probably going to win.”

After a revolving door of No. 1 teams this season, Gonzaga (18-1) has held onto the ranking for the past four weeks. But they might finally get a test when they face Santa Clara on Thursday night. The Broncos (15-3) are riding high off a win over Saint Mary's and have lost just once since the first week of December.

“I've been on them that there's accountability and honor that comes with the ranking,” Gonzaga coach Mark Few said. "You have to come out and own it. You should prepare and play as confident as anyone."

No. 13 Dayton (14-2) has a chance to prove it's the class of the Atlantic 10 with a pair of tough games this week. First, star forward Obi Toppin and the Flyers host VCU (12-4) on Tuesday night. Then they have to face Saint Louis (14-3) and its star, Jordan Goodwin, which has wins over Boston College and Kansas State on its resume.

The Flyers might have some company in the Top 25 soon, too. Duquesne (14-2) has quietly started to garner votes, and the Dukes have Fordham, Rhode Island and Massachusetts before a showdown with Dayton on Jan. 25.