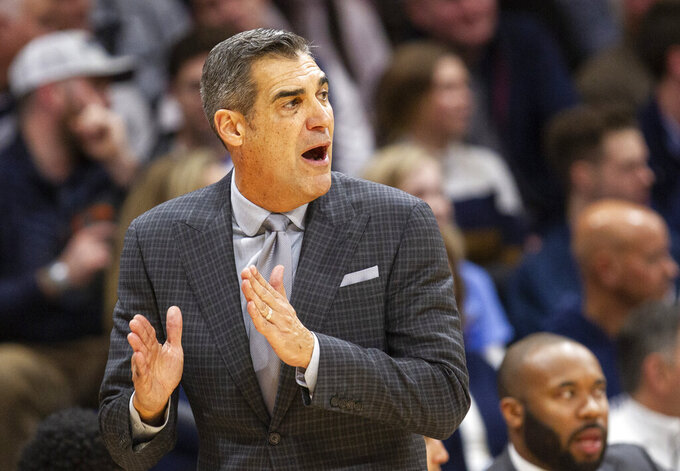 CHICAGO (AP) — One night, it might be Myles Powell, with Seton Hall's pair of 7-foot-2 centers patrolling the lane.

Or Villanova, with its championship pedigree and coach Jay Wright roaming the sideline.

Another tough Butler team. Xavier and its experience. The dynamic Markus Howard and Marquette. On and on it goes.

There are no off days in the Big East this year.

“You have to be on it every single night," Xavier coach Travis Steele said.

While the Big Ten, Big 12 and Atlantic Coast Conference dominate the AP Top 25 this week, there is something to said for the emerging depth of the Big East. Villanova (No. 10) and Butler (No. 11) are the only Big East teams in the Top 25, but seven more schools from the conference received votes for the poll.

Providence was the only Big East school that got shut out, and it rolled to a 76-60 victory over Georgetown on Tuesday. The Hoyas had won six in a row, including an 89-79 win against Syracuse on Dec. 14 that impressed Orange coach Jim Boeheim so much he called it the best Georgetown team he had seen in years.

“I don't think there's a conference in the country from 1 to 10 that has the quality of teams that our league does," Marquette coach Steve Wojciechowski said.

It's so good there is some concern it might end up costing the Big East when the field for the NCAA Tournament is set.

“The challenge is that from the rest of the country's perspective, if a team ends up being 9-9 or 10-8, does that hurt you because of the quality of the teams moving forward?" DePaul coach Dave Leitao said.

“The analytics and the metrics hopefully will state the fact that there are so many good teams and so many competitive teams. That will help us. That's the theory. You just hope that it plays itself out."

The first few days of Big East play provided a quick glance at the difficult road to the conference championship.

Collin Gillespie made a couple of big plays to help Villanova hold off Xavier for a 68-62 win Monday night. The Wildcats opened a 17-point lead in the first half before the Musketeers rallied.

Seton Hall used a terrific performance from Powell to top DePaul 74-66 in its Big East opener, finishing the game with a 9-0 run. Powell scored 18 of his 27 points in the second half after missing the previous two games because of a concussion.

The Pirates were the preseason Big East favorites in a poll of the conference's coaches. The Blue Demons were picked to finish last, but they got off to a 12-1 start.

“This is one of the best conferences in the country. ... This battle that we're about to go through, these next 17 games, I mean words can't even describe it," Powell said.

Seton Hall trailed DePaul for much of the game. Pirates coach Kevin Willard said the tense finish likely will be the norm this year in the Big East.

“I think the depth and the fact that the league has gotten older and more mature from last year — last year we were a younger league — I just think every night you're going to go out there and it's going to be a six-point game, five-point game," he said. “It doesn't matter if you're home or on the road. It's just going to be a battle."

With so much depth in the league, staying healthy could be one of the biggest keys.

While Seton Hall got Powell back against DePaul, Sandro Mamukelashvili remains out with a broken right wrist. St. John's guard Mustapha Heron has missed three straight games with a sprained right ankle. Georgetown guard Mac McClung missed the loss to the Friars with an eye injury. Butler guard Kamar Baldwin was bothered by a right ankle injury during the Bulldogs' 60-58 victory over the Red Storm on Tuesday night.

Butler blew a 23-point lead against St. John's before escaping with the win. Just another night in the Big East.

“We've got to eat right, sleep right, take care of our bodies," Butler coach LaVall Jordan said. “We've had to do a good job of practice planning so that we are fresh and we got full energy amongst the entire group because it's going to be a battle every night."