Big men in middle is something new at No. 12 Seton Hall 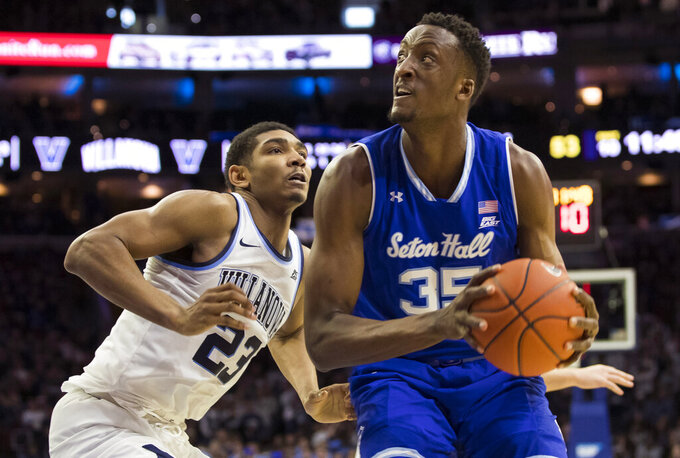 FILE - In this Jan. 27, 2019, file photo, Seton Hall's Romaro Gill, right, looks for the basket against Villanova's Jermaine Samuels, left, during the second half of an NCAA college basketball game, Sunday, in Philadelphia. Gill, who has been steadily improving, also is 7-2 and is battling Ike Obiagu for the starting center job. (AP Photo/Chris Szagola, File)

SOUTH ORANGE, N.J. (AP) — With preseason All-America Myles Powell and three other starters back, it's no surprise Seton Hall is No. 12 in The Associated Press preseason Top 25.

The surprise for opponents this season will be waiting in the paint. The Pirates have a new rim presence on both ends of the court that could be a game changer.

It starts with Florida State transfer Ike Obiagu. The 7-foot-2 sophomore from Nigeria played in 34 games and averaged 2.3 points, 2.6 rebounds and 2.1 blocks playing less than 11 minutes in 2017-18, helping the Seminoles reach the NCAA Tournament round of eight.

Obiagu isn't the Seton Hall's only big guy. Far from it.

Senior Romaro Gill, who has been steadily improving, also is 7-2 and is battling Obiagu for the starting center job. Their play has allowed 6-11 junior Sandro Mamukelashvili to move from the starting center spot for his more natural position at power forward.

Even the backups are big. Junior Taurean Thompson (6-11) appeared 27 games last year with a start, and Canadian freshman Tyrese Samuel is a 6-10 forward who is smooth on the court

"We had a ton of NBA scouts come in and every one comes over and looks at me and says this looks like an NBA team," coach Kevin Willard said. "I think it is one reason why we haven't practiced long and I have kept practices kind of lighter than in the past because of how big and physical we are."

He said Obiagu and Gill don't need to post up to be effective. They can protect the rims. They can run the floor. They are working hard on pick and rolls and setting screens, which should open shots for Powell and fellow guards Myles Cale and Quincy McKnight.

"Our guards love to drive and just throw it up to them and let them dunk it," Willard added. "They are not just a front-court presence. Defensively, every time you go down there, they are going to be there. You know you are going to have to go over them."

Willard also has options. He can go "small," playing Mamukelashvili at the center with Samuel or Jared Rhoden (6-6) at the power forward.

The offense is going to continue to go through the guards, although the Pirates will probably be a little physical and post up more.

Powell, who decided to return for his senior season, is the go-to guy. He averaged 23.1 points last season, the eighth-highest scoring average in school history, 13th-best in the nation and second-best in the Big East Conference. Cale averaged a career-best 10.2 points and McKnight averaged 9.4, had a team-high 134 assists and was second with 55 steals. The senior also handled the defensive assignments on the top opposing guard.

The big guys are the extra this season.

Obiagu is just happy to be playing again after sitting out last season as a transfer. He has worked hard to improve his offensive game and feels his hands are better.

"The way me and Ro go in practice, we feel we can go against anybody," Obiagu said. "We can affect games. Guards can get blown by and we have their backs and we can block the shots."

Rhoden has challenged the big guys in practices and laughs about it.

"It's pretty intimidating," said the sophomore, who averaged 3.4 points and 2.6 rebounds last season. "I am not going to lie. When you see those big guys down there, you don't even want to mess with them. You try to kick it out or do a shot fake and then try to go up. But they block everything. They block everything."

The inside defense can only help the Pirates, who gave up an average of 71.9 points in posting a 20-14 record and earning their fourth straight trip to the NCAA Tournament. The Big East preseason favorite has never been to five in a row.

"I think we are going to be a pretty big presence out there," said Gill, who averaged 2.3 points, 2.7 rebounds and just over a block in 27 games.

The biggest beneficiary of having Obiagu and Gill in the middle is Mamukelashvili. He should have more energy at power forward and could be a bigger threat on offense after averaging 8.9 points and a team-high 7.8 rebounds in 34 games last season.

"That's my position," Mamukelashvili said. "I will be more comfortable. I will have so much more freedom now to just play my game. I'm a team player and last year I had to do what the team needed. Now I feel I have more freedom to catch and rip and just face up and go with my pace and help with what the team needs. It's an exciting year."