Big Ten Commissioner Jim Delany will step down in June 2020 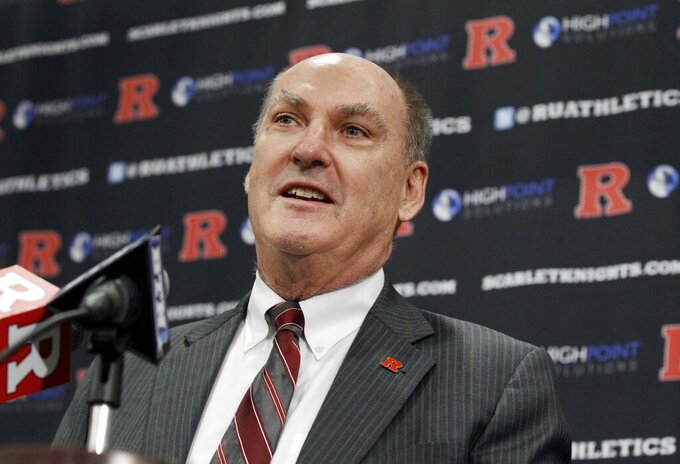 FILE - In this Nov. 20, 2012, file photo, Big Ten Conference Commissioner Jim Delany answers a question during a news conference, at Rutgers University in Piscataway, N.J. Delany, one of the most influential figures in college athletics for three decades, will step down as Big Ten commissioner when his contract expires June 30, 2020. The Big Ten announced Delany’s plans on Monday, March 4, 2019. The 71-year-old has been commissioner since 1989. (AP Photo/Mel Evans, File) 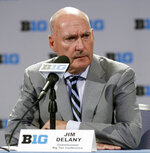 Over three decades, as Big Ten revenues soared under his leadership, Delany has become one of the most powerful and influential figures in college sports. On Monday, he set an end date for his time as Big Ten commissioner: June 30, 2020, when his current contract expires.

"As we moved into 2020, I thought in my own mind, talking with family — my wife — hey, 31 years is more than enough time to make an impact," Delany said in an interview. "Time for a change. I'm appreciative and thankful for the opportunity, but I think 2020 is the right time."

Delany said he intends to help with the transition, but does not anticipate being part of the selection process for his replacement. The Big Ten Council of Presidents and Chancellors has started a search for a new commissioner led by Northwestern President Morton Schapiro. Potential candidates could include former Big Ten network president and current Fox Sports executive Mark Silverman; Big Ten senior associate commissioner Mark Rudner; Big Ten deputy commissioner Diane Dietz; and Northwestern athletic director Jim Phillips.

"(Delany) has been a forward-thinking, collaborative and decisive leader in every aspect of conference proceedings," Schapiro said. "We thank him for his dedicated service to date and look forward to working with him through the conclusion of his contract."

Delany said he would be "judicious" when it comes to weighing on issues that will have long-term implications for the Big Ten, which now stretches from Nebraska to New Jersey.

Delany helped create the five-year-old, four-team playoff, but for years he and the Big Ten acted as a speed bump along the path to changing the sport's postseason. Always protective of the Big Ten's lucrative and longstanding partnership with the Rose Bowl, the Big Ten was slower than the other major conferences to embrace changing the way a champion was crowned in college football — whether it was the BCS or the CFP.

Delany became the Big Ten's fifth commissioner when he succeeded Wayne Duke in 1989. He ambitiously built the conference profile, negotiating television deals worth billions that in 2018 produced an unprecedented distribution of $51 million alone for Michigan, one of the flagship members. While the Big Ten has never been more profitable, it has lagged behind some of its rival conferences in producing national champions in the most high-profile sports this century.

A Big Ten team has not won the NCAA men's basketball tournament since Michigan State in 2000. Ohio State's 2002 and 2014 national championships have been the Big Ten's only football titles since 2000. The Southeastern Conference has 11 football championships in that time.

High-profile scandals in recent years involving athletic departments at Big Ten schools such as Penn State, Michigan State and Ohio State have called into question the conference's role in policing and disciplining its members.

But under Delany, the Big Ten has also had stability even during uncertain times across college sports.

"I feel really good about the collaborative culture that we've created among competitors inside of our conference, which has allowed us to assess the opportunities and risks and execute against them," Delany said. "I think that sort of culture is one of the things that I'm sort of proudest of. I think we've gotten better at it. And it's not to say we don't make mistakes. It's not to say we're right on every count, but I like where we're located in our media world, in our bowl world and in our NCAA world."

When Delany launched the Big Ten Network in partnership with Fox in 2006, the Big Ten became the first Power Five conference with a television network devoted solely to programming of league events. The network was the first in cable/satellite history to reach 30 million households within its first 30 days on the air.

Delany expanded the Big Ten's geographic footprint from the upper Midwest to the East Coast. Penn State began competition in the league in 1991. Nebraska joined in 2011 and Maryland and Rutgers in 2014. The addition of Nebraska led the Big Ten to split into divisions in football and play a conference championship game. The additions of Maryland and Rutgers led the Big Ten to open a second conference office in New York to go with its traditional Midwest home in the Chicago area.

While conference expansion has been a boon for the Big Ten financially, it has taken a toll on some aspects of college sports as a whole. Some conferences have crumbled, others have been marginalized and traditional rivalries have been frayed. The integration of Rutgers and Maryland since they joined in 2014 has been bumpy as both schools have had on and off-the-field issues, though Delany said he believes both are "still great long-term plays."

During a time of sweeping change in college sports the Big Ten under Delany has been at the forefront.

"I felt a particular primary advocacy for our conference," Delany said, "but was always aware of the impact on others."