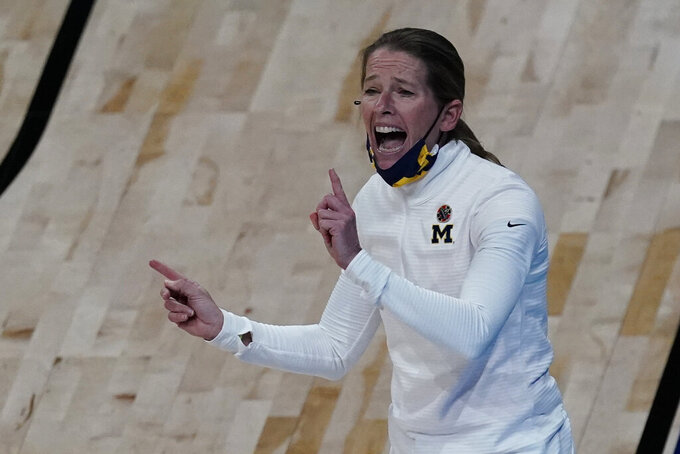 Michigan head coach Kim Barnes Arico talks to her players during the second half of a college basketball game against Tennessee in the second round of the women's NCAA tournament at the Alamodome in San Antonio, Tuesday, March 23, 2021. (AP Photo/Charlie Riedel)

SAN ANTONIO (AP) — The Big Ten Conference has made a major mark on the Sweet 16 with a record four teams left in the NCAA Tournament.

Indiana, Iowa, Maryland and Michigan have all reached the regional semifinals. The league had only four teams combined make the Sweet 16 in the four previous tournaments.

“Thank you to our student-athletes, coaches, athletic directors, staff, chancellors and presidents for their tremendous effort, grit and leadership.”

Wolverines coach Kim Barnes Arico, who's team ousted third-seeded Tennessee on Tuesday, said she left her former job at St. John's because she wanted to bring the feeling of success to Michigan's women's program.

Iowa, led by freshman guard Caitlin Clark, is part of the final 16 for the third time since 2015. The Hawkeyes reached the Elite Eight in 2019 before falling to eventual national champ Baylor.

Maryland, too, has a history of success in the NCAAs under coach Brenda Frese, reaching the Sweet 16 eight times since 2006 when it won the national championship. This, however, is the Terps' first such trip since 2017.

Indiana advanced for the first time in its history by defeating 12th-seeded Belmont.

UConn coach Geno Auriemma rejoined his team in Texas after missing the top seed's first two games because of a positive COVID-19 test.

It was a joyous reunion for the Huskies, who cheered and mobbed Auriemma when he walked in their meeting room. The players ran at him for a group hug.

“This must be the most boring place on earth,” Auriemma joked about their reaction.

Auriemma's long-time assistant Chris Dailey led the team to victories over High Point and Syracuse to reach the Sweet 16 for the 27th straight tournament. Now, Auriemma will have a front-row seat at the next game where the Huskies face fifth-seeded Iowa — and the matchup of the nation's top freshmen in UConn's Paige Bueckers and Iowa's Caitlin Clark.

As teams are eliminated from the NCAA Tournament, seniors who have one more year of potential eligibility suddenly face big decisions: Stay or go?

More basketball awaits for those who might play in the WNBA or professionally overseas. Earning a living and putting a newly earned degree to use might press others into the workforce.

Eligible players who plan to make themselves available in the WNBA draft must opt-in via email to the league no later than April 1. For those in the Final Four, they'll have 48 hours after the conclusion of their last game to alert the WNBA.

Oregon State star Aleah Goodman broke into tears when the Beavers were eliminated by powerhouse South Carolina on Tuesday night. She needs some time to ponder what’s next.

“I think conversations obviously with coaching staff, my parents, is something that I’ll have and then I’ll figure it out down the line, for sure,” Goodman said.

HOLD OFF ON THAT TRIP

Oregon coach Kelly Graves will have to postpone his trip to Indianapolis now that his team is back in the Sweet 16.

The Ducks, seeded sixth, defeated No. 3 seed Georgia on Wednesday to make the round of 16 for their fourth consecutive tournament.

Graves, had his team lost, was headed north to watch the top-seeded Gonzaga men where his son, Will(. He is a walk-on for the undefeated Zags, who play Creighton on Sunday for a spot in the men's Elite Eight.

“I booked a hotel room there in case I needed it,” Graves said in a phone interview. “I’ll gladly eat the cost of it if it means we’re still playing here in San Antonio.”

The NCAA said Wednesday it has had only two positives from more than 12,500 tests administered during the event.