Big Ten This Week: No. 13 Badgers out to avenge Rutgers loss 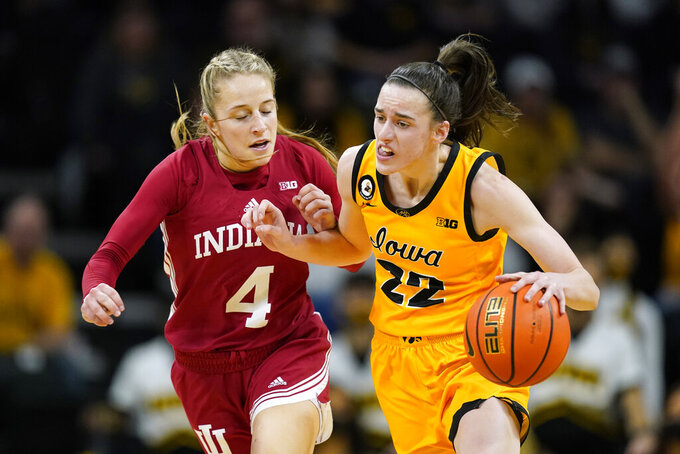 A look at the upcoming weekend around the Big Ten Conference:

No. 13 Wisconsin at Rutgers, Saturday. The Badgers (22-5, 13-4) must avenge their Feb. 12 loss to the Scarlet Knights to set up a Tuesday home game against No. 4 Purdue that could decide the top seed in the conference tournament. Rutgers (16-11, 10-7) really could use a win here to help its NCAA Tournament chances. The Scarlet Knights are no lock for a bid and are coming off consecutive losses. Rutgers' 73-65 victory over Wisconsin two weeks ago came during its stretch of four straight wins against ranked opponents. The Knights held Johnny Davis to 11 points and Brad Davison to 1-for-9 shooting on 3-pointers. Wisconsin will enter this game off three straight wins since that loss.

Indiana (17-10, 8-9) is teetering on the NCAA bubble but helped itself with a win over Maryland on Thursday. The Hoosiers bounced back after blowing a late lead in an overtime loss at Ohio State, and guards Rob Phinisee, Khristian Lander and Trey Galloway got hurt. They finish at Minnesota, at home against Rutgers and at Purdue.

Iowa's Keegan Murray is averaging 28 points the past two weeks, the top figure among Power 5 players. He joined ex-Hawkeye Luka Garza as the only two Big Ten men’s players in the past decade to score 20 or more points in seven straight games. Murray has scored 25 or more in an NCAA-best 12 games this season and has a chance to put up huge numbers again Friday when the Hawkeyes visit last-place Nebraska. Murray had a career-high 37 in a 98-75 win over the Cornhuskers two weeks ago.

Purdue has won 12 of its last 14 games after a 1-2 start in Big Ten play. The Boilermakers' 24-4 record is their best 28-game start during the Matt Painter era and matches their best start since the 1987-88 team opened 26-2. ... Illinois has won at least 12 Big Ten games three straight years for just the third time in program history. The Illini also did it in 1951-53 and 1987-89. ... Ohio State just finished a stretch of three games in eight days and will finish the regular season with five games in 11 days.

No. 6 Michigan visits No. 21 Iowa on Sunday in a much-anticipated rematch for the Hawkeyes. Iowa star Caitlin Clark scored a career-high 46 points and led a late comeback that fell short in a 98-90 loss at Ann Arbor on Feb. 6. Michigan (22-4, 13-3) leads a tightly packed top of the Big Ten standings. Four teams are within a game of the Wolverines. ... Ohio State held Wisconsin to a season low for points in a 59-42 win last Sunday. The Badgers managed just seven points each in the second and third quarters. ... Northwestern's Veronica Burton filled up the stat sheet in a 82-59 win at Illinois on Sunday. Burton had 13 points to go with career highs of 14 assists and arena-record nine steals.