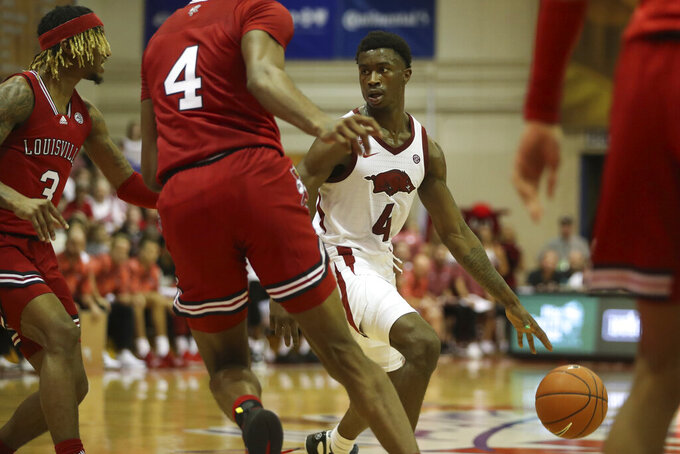 Arkansas guard Davonte Davis (4) looks for an open teammate during the first half of an NCAA college basketball game against Louisville, Monday, Nov. 21, 2022, in Lahaina, Hawaii. (AP Photo/Marco Garcia)

LAHAINA, Hawaii (AP) — Anthony Black dominated from inside and outside to finish with 26 points for No. 9 Arkansas, which overwhelmed Louisville in the second half for an 80-54 victory Monday in the first round of the Maui Invitational.

Black, a freshman guard who topped the No. 2 recruiting class in the country, made 9 of 11 shots, including 3 of 5 3-pointers, made all five free throws and and had six assists. Ricky Council IV added 15 points and Makhel Mitchell 12 for the Razorbacks (4-0), who had no trouble stepping up in competition after opening the season with three easy wins at home.

Kamri Lands scored 13 and El Ellis 11 for Louisville, which dropped to 0-4 in its first season under coach Kenny Payne, a former Cardinals star.

Black, a freshman guard who topped the No. 2 recruiting class in the country, carried the Razorbacks the entire game. He scored 12 points in the first half to stake the Razorbacks to a 36-28 lead, including consecutive 3-point shots during an early run. The Razorbacks — who have reached the Elite Eight in consecutive seasons — also played a strong inside game, with Black making a baseline slam dunk and Council making an alley-oop slam dunk.

The Razorbacks simply wore down the Cardinals and had a number of easy dunks during a 17-0 run in the closing minutes, including three by Mitchell.

Louisville drops into the loser's bracket to face No. 21 Texas Tech, which lost to No. 10 Creighton 76-65 in the opening game.