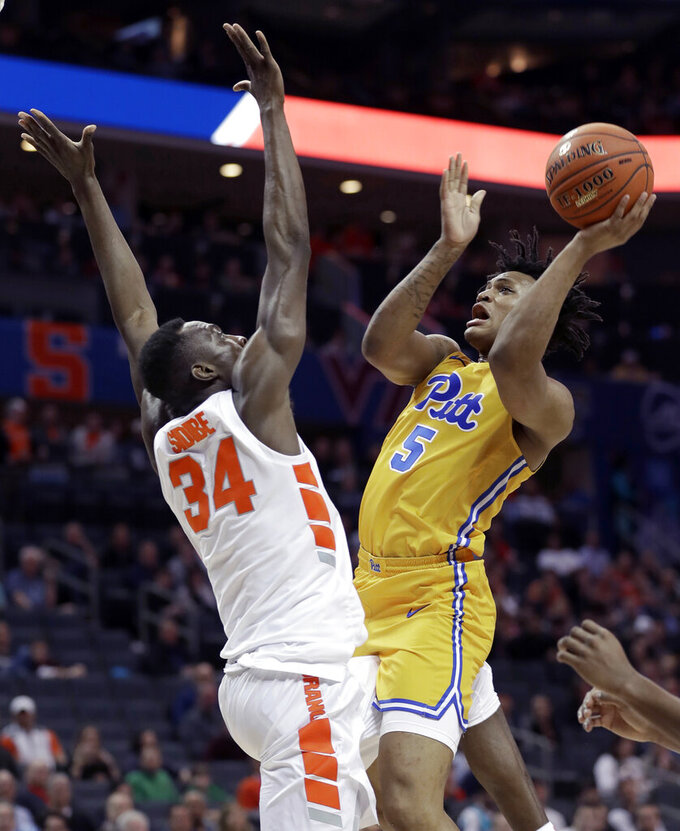 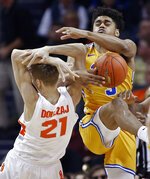 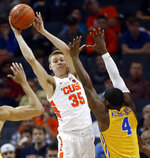 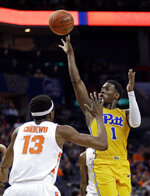 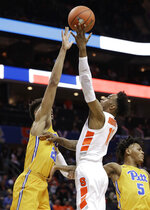 CHARLOTTE, N.C. (AP) — Jim Boeheim said his son Buddy's mother tells him all of the time that their boy should be playing more.

Maybe she's on to something.

Buddy Boeheim scored a career-high 20 points, and Syracuse defeated Pittsburgh 73-59 on Wednesday night in the second round of the Atlantic Coast Conference Tournament without leading scorer Tyus Battle.

"I think that is more the mom in her, not the coach," Buddy Boeheim said with a laugh. "It's always nice when you go out there and play well, when you are starting especially."

Boeheim got the start for the Orange (20-12) in place of the injured Battle and played an instrumental role in a second half comeback hitting 6 of 13 shots from the field while grabbing six rebounds and dishing out four assists.

Syracuse trailed 36-30 at halftime after Pitt's Jared Wilson-Frame connected on 6 of 9 3-pointers before intermission.

But with the Orange down five, Boeheim scored on a drive and knocked down two 3-pointers from the top of the key to give Syracuse the lead. After Elijah Hughes and Frank Howard connected on 3s, Boeheim somehow grabbed his own miss amid the trees in the lane, scored and drew a foul for a 3-point play to give the Orange a 52-43 lead.

"Buddy is a very good shooter," Jim Boeheim said of his son. "He's shot it well all year. He's only really played about 14 minutes a game, and he's averaged almost eight points a game. His mother tells me he should be playing more all the time — every day — but he's been well-prepared to be able to step up in this kind of game."

Pitt coach Jeff Capel said Boeheim's ability to shoot the ball from the deep opens up things for the Syracuse offense.

"He can stretch you out and now all of a sudden you're playing in closeouts," Capel said. "He's improved from the first time we played him. I thought the first time he was more of just a shooter. I think he's made an adjustment, and you can tell the staff has worked with him on doing other things besides just being a three-point shooter. He's got a mid-range game now, he can play off of a shot fake."

Hughes and Howard each had 18 points for the Orange, who'll face No. 5 Duke in a rubber match Thursday night in the quarterfinals in a game that could feature the return of Zion Williamson from an injury.

Hughes made some big shots for the Orange in the second half, finishing four points shy of his career high.

"Coach said some guys got to make a few more plays (with Battle out), and I feel like me and Frank did a good job and Buddy, as well," Hughes said. "Everybody stepped up and made big plays, whether it was on defense or offense."

Pitt's freshman backcourt of Trey McGowens and Xavier Johnson, who combined for 46 points in a first round win over Boston College, were limited to seven points with their drives nullified by the presence of 7-foot-2 Paschal Chukwu's shot blocking ability.

Chukwu had six blocks against Pitt.

"Paschal is a key for us, no question," Boeheim said.

SHOT AT THE RECORD

Pitt's Wilson-Frame finished with 24 points on eight 3-pointers, one shy of the ACC Tournament record held by Randolph Childress of Wake Forest in 1995.

Boeheim was upset with his how team defended the 38 percent 3-point shooter in the first half and said after the game he congratulated Wilson-Frame and told him "I'm glad you're a senior; I've seen enough of you here."

NO TIME TO BATTLE

Boeheim said that the team hoped Battle would be ready to play against Pitt, but he showed up at the arena with a sore back and is probably "still two or three days away" from being able to play.

That likely means he won't be playing against Duke.

Battle is averaging 17.2 points per game.

Pittsburgh: The Panthers (14-19) won only three games in the regular season but have a solid young nucleus returning next season led by Johnson and McGowens.

Syracuse: The Orange may have solidified a spot in the NCAA Tournament with their 20th win despite playing in a difficult conference.

Syracuse: Will play Duke for a third time. The teams split during the regular season with both teams winning on the road.