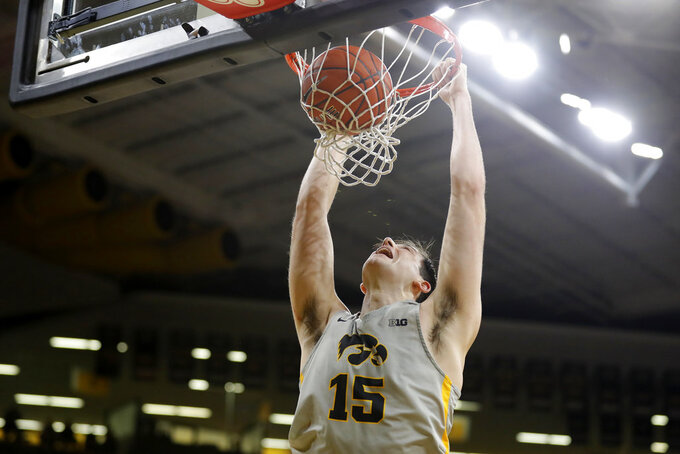 IOWA CITY, Iowa (AP) — In a game that Iowa simply had to have, junior Jordan Bohannon carried the 25th-ranked Hawkeyes with one of the best halves of his career.

Bohannon scored 22 of his season-high 25 points in the second half, Tyler Cook had 16 points and Iowa beat No. 24 Nebraska 93-84 on Sunday, snapping a three-game losing streak to open Big Ten play.

"It's hard to get your first Big Ten win, especially against a team like Nebraska. They have one of the most talented (starting lineups) in the Big Ten," Bohannon said. "We got some stops when we needed to, especially down the stretch."

Bohannon, on the other hand, kept hitting 3s that kept the Huskers at bay.

Bohannon's one-handed banked 3, his first basket of the game, gave Iowa a 44-40 lead at the halftime buzzer. Bohannon drilled another 3 to help slow Nebraska's momentum and push Iowa's edge back up to 72-63 — and he did the same after the Huskers got within 72-68.

"When you make one, the basket seems to get a little bigger," Bohannon said.

"He's just a very good perimeter player," Nebraska coach Tim Miles said about Bohannon, who torched the Huskers after they went to a 1-3-1 zone. "He's one of those guys that makes his team just so much better."

Isaac Copeland had 24 points to lead Nebraska, which dropped back-to-back games for the first time this season. James Palmer Jr. scored 20 points, but Iowa held the Big Ten's second-leading scorer without a point for the opening 18 minutes.

"We didn't play with as much urgency as Iowa did," Miles said.

Iowa: After missing three games with a sprained ankle, sophomore center Luka Garza checked in with 11:59 in the first half. It was a welcome sight for the Hawkeyes, who've desperately missed the big man's presence in the post. Garza had eight points in 10 minutes. "It gives us another offensive weapon inside. It gives us a post presence defensively," Iowa coach Fran McCaffery said.

Nebraska: The problem with blowing winnable road games, as the Huskers did against Minnesota and Maryland, is that it leaves less of a cushion for those times when shots just won't go down on the road. Ironically, Nebraska kept it close by hitting 20 free throws.

It's possible, if not probable, that both teams will drop out of the poll Monday after losing to unranked teams this week.

Nebraska's Isaiah Roby scored 17 points on 8 of 10 shooting with nine rebounds. But he battled foul trouble in the second half. ...Isaiah Moss had 12 points and 10 assists for Iowa, and Joe Wieskamp had 10 points with seven boards. ...Iowa committed 13 turnovers. ...Nebraska was 26 of 42 inside the arc.

"He knows (that) all I've ever done is encourage him to keep shooting," McCaffery said about Bohannon, who moved into fourth place on made 3s in school history. "We'll just keep telling him to shoot. That's what he does."

Iowa: At Northwestern on Wednesday night.