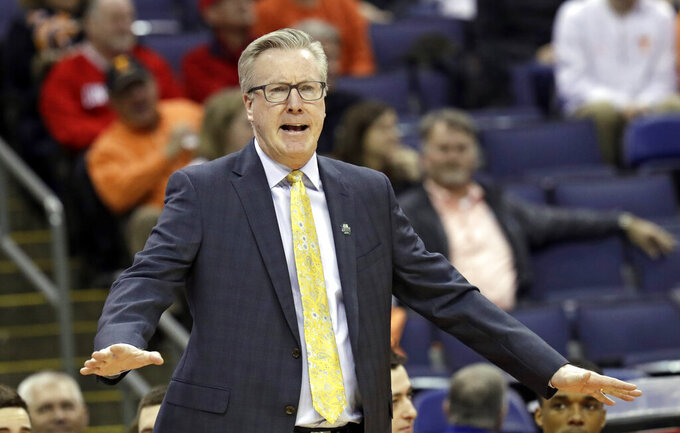 FILE - In this March 22, 2019, file photo, Iowa head coach Fran McCaffery yells instructions to players in the first half against Cincinnati during a first round men's college basketball game in the NCAA Tournament in Columbus, Ohio. Defections, transfers and a key injury made this the most chaotic offseason in coach Fran McCaffery's decade-long tenure at Iowa. But that doesn't necessarily mean the Hawkeyes are in for a down season in 2019-20. (AP Photo/Tony Dejak, File)

IOWA CITY, Iowa (AP) — Iowa coach Fran McCaffery's tradition of quiet offseasons was shattered this spring. It does not mean the Hawkeyes are in trouble next season.

Iowa (23-12, second round of the NCAA Tournament in 2018-19) lost star Tyler Cook to the NBA draft, Isaiah Moss as a surprise graduate transfer to Kansas and program anchor Jordan Bohannon to a hip injury that has left his status for his senior year in serious doubt.

For good measure, Joe Wieskamp gave Hawkeyes fans a mild scare by going through the draft process before deciding to return for his sophomore season.

Bohannon has already set the school record with 264 3-pointers. He ranked third on the team in scoring (11.6 points per game) and led the Big Ten in free throw accuracy in conference games despite hurting his hip early last season. There remains no timetable for the return of Bohannon, the program's unquestioned leader with Cook gone.

"It's going to take a long time," Iowa coach Fran McCaffery said Tuesday. "His focus right now is on one thing, and that's getting better. You can't be worried about when he's coming back."

If Bohannon is forced to redshirt, the Hawkeyes will proceed with sophomore backup Connor McCaffery and incoming freshman Joe Toussiant. Valparaiso grad transfer guard Bakari Evelyn should also be in the mix, although McCaffery isn't yet authorized to speak about Evelyn because his signing with the Hawkeyes has yet to become official.

"Versatility is what we're looking for there. We've got some flexibility," McCaffery said. "We've got a lot of options there."

While Iowa will have plenty of new faces in 2019-20 — especially in the backcourt — it might not be in for a rebuild if those new players can reach their potential quickly.

McCaffery said his son, Patrick McCaffery, will likely play as a true freshman. The 6-foot-8 McCaffery, a two-time first-team all-state pick for Iowa City West High, could help Iowa compensate for the loss of Moss and Nicholas Baer on the perimeter — provided he puts on enough weight this offseason to be able to handle Big Ten play.

Shooting guard CJ Fredrick, a former Kentucky state player of the year who redshirted last season, will also eat up some of the minutes the sharp-shooting Moss left behind. Fredrick shot nearly 50 percent on 3s as a senior in high school, and Iowa will be looking for guards who can hit from beyond the arc with Bohannon out.

The Hawkeyes look much more settled up front.

They planned for Cook's departure in part by redshirting 6-foot-11 Jack Nunge, who averaged 5.7 points a game with 25 blocks as a freshman in 2017-18. He should team up with center Luka Garza, an honorable mention All-Big Ten pick, and key reserve Cordell Pemsl to form one of the deeper post units in the Big Ten.

Wieskamp, the state of Iowa's all-time leading scorer in his classification, averaged 11.1 points and shot 42.4 percent on 3s last year for a team with plenty of other options offensively. But many of those guys are gone, and Wieskamp knows he won't be able to afford to be content in a supporting role any longer.

"I'm not the most vocal guy. I kind of keep to myself," Wieskamp said. "I'm really going to have to expand myself, become more of a vocal leader."