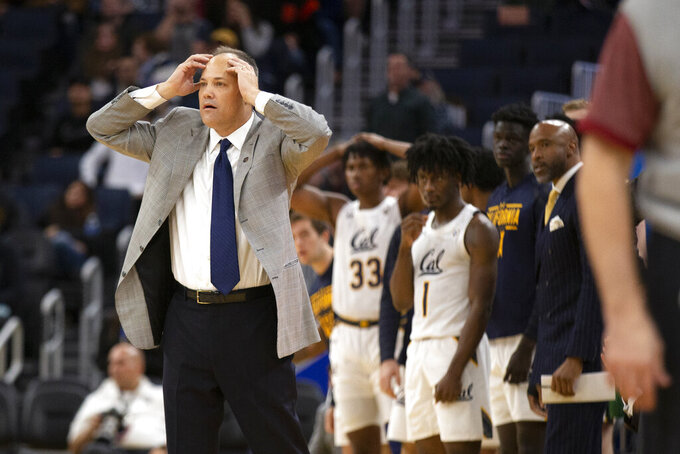 SAN FRANCISCO (AP) — Boston College coach Jim Christian endured quite a bit of pain traveling cross country after having microfracture surgery on his left ankle Monday. A big run late in the second half and a pivotal shot by Jairus Hamilton made the flight home a lot more comfortable.

Hamilton scored 18 points and made a tiebreaking 3-pointer with 1:35 left, and Boston College held off California 64-60 in the Al Attles Classic on Saturday.

“When we play the way we’re supposed to play, the way we guard (and) rebound the basketball, we’re really good,” Christian said. “When we come out of character and play a little too much individualized or don’t guard things the way we do, we’re not.”

Rishwain sparked the surge with 10 points including a pair of 3s and two free throws that gave Boston College a 56-52 lead.

California rallied to tie the game at 58 on a basket by Bradley before Jairus Hamilton’s shot just beyond the arc put Boston College ahead for good.

Derryck Thornton and Jay Heath combined for four free throws in the final 39 seconds for the Eagles.

Boston College has won all three games against California, though this was the first between the two teams since 2010.

Christian, who was on crutches after the game, joked that he injured his ankle in a dunk contest. Hamilton grinned when asked to confirm his coach’s comments.

“My mother told me not to tell lies,” he said.

“We started the second half very well then we had a defensive burp that allowed them to get back in it,” Bears coach Mark Fox said. “We just have to play more complete basketball to beat a well-coached team.”

Neither team shot well from the perimeter in the first half, but both went on big runs.

Bradley had seven points as part of California's 15-0 burst that put the Bears ahead 21-10. Boston College bounced back with six free throws during a 10-0 run.

The Eagles repeatedly got to the line before halftime and cut the lead to 29-26 following four consecutive free throws by Hamilton.

“We started playing a little more aggressively on defense, took the ball to the basket,” Christian said. “I thought we were just settling for 3s. We were taking the first 3 available to start the game. We hit a couple early, which sometimes is a bad thing. In the second half we played really smart.”

Boston College: The Eagles sputtered midway through the first half, steadied themselves then pulled away down the stretch. That’s a significant step for Christian’s team, which has been on the wrong side of several lopsided losses.

California: The Bears made progress offensively but needs to find a complementary scorer to take some of the pressure off Bradley. That lack of balanced scoring hurt down the stretch. Fox was called for a technical foul for the second consecutive game.

Boston College: The Eagles play at No. 4 Duke on New Year’s Eve.

California: Play Harvard at Hass Pavilion in the Bears final non-conference game of the year on Dec. 29.