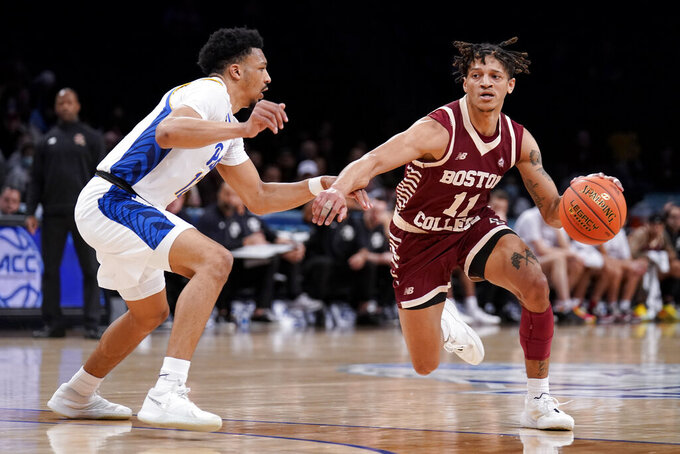 Boston College (12-19) won its first conference tournament game since 2018 to advance to play ACC player of the year Alondes Williams and No. 5 seed Wake Forest in the second round on Wednesday. The Eagles lost at Wake Forest 87-57 on Jan. 24.

This one was over early in the second half. Pittsburg went without a field goal for 11-plus minutes as Boston College extended its lead to 46-25.

Boston College made 3 of 4 free throws with 18:21 left in the second half following flagrant and technical fouls to extend its lead to 36-23. The Eagles had a chance at a six-point possession but Quinten Post’s wide open 3-pointer from the corner was short. Pitt did not make a field goal for the final 4 minutes, 50 seconds of the first half. John Hugley ended the drought with a jumper from the free-throw line with 13:48 remaining in the game.

Pittsburgh (11-21) closed the season on a five-game losing streak — with 20-plus-point blowouts to Miami, Duke, Notre Dame and BC.

Hugley picked up his second foul with 4:14 left in the first half, joining two other Pitt starters on the bench with two fouls. Boston College capitalized on Pitt’s foul trouble by going on a 12-0 run for a 33-22 lead. Burton was whistled for his third foul with 25 seconds left in the half.