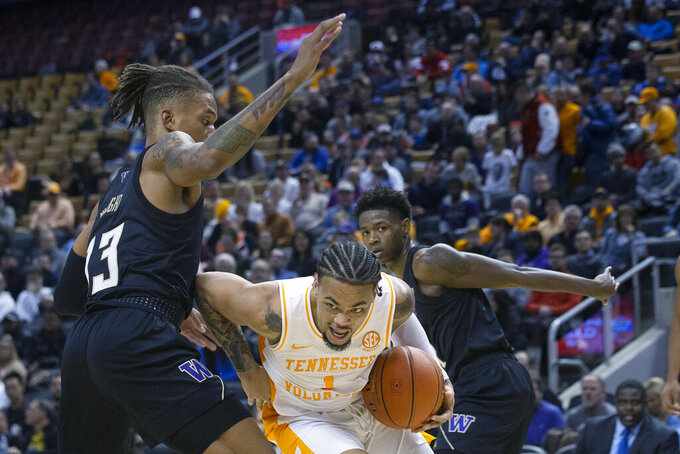 Tennessee's Lamonte Turner, center, drives past Washington's Hameir Wright during the first half of an NCAA college basketball game in the James Naismith Classic, in Toronto on Saturday, Nov. 16, 2019. (Chris Young/The Canadian Press via AP)

On Saturday, Barnes' squad passed its first test in style.

Jordan Bowden scored 15 of his 18 points in the first half, Lamonte Turner had 16 points and the Volunteers upset No. 20 Washington 75-62 in Toronto.

"We've got to go test ourselves," Barnes said. "We have to do that. We've always believed in that. We believe that this time of year, it's really about trying to get yourself ready for conference play. To do that, you've got to play a high-level opponent like we played today."

Yves Pons scored 15 points, John Fulkerson had 14 and Turner added seven rebounds and eight assists as the Volunteers improved to 3-0 and handed Washington its first loss in three games this season.

"We just got a little bit out-classed but we can learn from it," Washington coach Mike Hopkins said.

Pons scored in double figures for the third straight game.

The game was the middle feature in the James Naismith Hall of Fame Classic, an NCAA triple header at Scotiabank Arena in downtown Toronto, home of the defending NBA-champion Raptors.

Washington, which began its season with a neutral-site win over ranked Baylor, didn't fare so well north of the border, falling behind by as many as 14 against the Volunteers.

"I felt like we were in sand a little bit today," Hopkins said. "They were moving the ball, we weren't as active and disruptive as we normally were. Our rim protection wasn't as good as it was against Baylor."

Nahziah Carter had 18 points and 12 rebounds, Isaiah Stewart had 14 points and 10 rebounds and Jaden McDaniels scored 15 for the Huskies.

Quade Green scored 10 points but Washington struggled with its outside shooting, going 5 for 18 from 3-point range.

The Huskies struggled for the second straight game. Washington overcome an awful offensive first half to pull away for a 56-46 win over Mount St. Mary's Tuesday.

Stewart's jump shot with 18:28 left in the first half put the Huskies up 3-2 but Turner answered with a 3-pointer, giving Tennessee a lead it would not relinquish.

"We knew the middle of the zone was going to be open," Turner said. "We've got big guys who can make that shot."

Pons drew cheers from his bench for a huge block on Carter's dunk attempt midway through the first. The loose ball ended up with Huskies guard Quade Green, whose jump shot bounced off the rim. Carter, who had fallen to the court along the baseline after the block, got back on his feet in time to jump and put back the rebound, then turned and yelled at the Volunteers bench as he headed back up court.

Washington called timeout after Bowden's 3-pointer with 8:55 left in the first capped a 7-0 run and gave Tennessee a 25-13 lead. The Volunteers stretched their advantage to 38-24 on a 3 by Pons with 1:47 left in the half. Bowden scored 15 points in the first half and Pons had 11 as the pair combined to make four of five attempts from 3-point range and 10 of 14 overall.

Tennessee recorded an assist on each of its 15 made baskets in the opening half and led 40-28 at the intermission. Tuner had seven assists for the Volunteers, matching Washington's first half team total.

"We were in rhythm," Barnes said. We were getting things done and playing at a very high percentage."

Carter, McDaniels and Stewart were the only three Huskies players to score in the first half, combining to make 13 of 23 attempts. Six other Washington players shot 0 for 7.

Carter made his only attempt from 3-point territory, the only Washington player to connect from long range in the opening 20 minutes.

"They controlled the pace for most of the game," Hopkins said.

After both teams went scoreless for almost three minutes in the second half, Carter made a fast break reverse layup to cut the deficit to 50-41, then made a block that led to another Washington basket, cutting the gap to seven at 50-43 with 11:22 remaining. Josiah-Jordan James replied with a 3 as the Volunteers pushed their lead back to 10 points.

"Every time we had a little bit of momentum where you could turn a switch, they made a big shot or made a big play," Hopkins said.

Washington's Carter and Stewart are both from Rochester, New York, about 170 miles southeast of Toronto.

Washington: The Huskies recorded a season-low four blocks after averaging an NCAA-best 11 over their first two games.

Tennessee: The Volunteers opened their season with home wins over UNC Asheville and Murray State before heading north to Toronto. Tennessee has games against Florida State, No. 13 Memphis, and Wisconsin ahead before the SEC schedule gets underway in January.

Tennessee finished with 19 assists on 25 made baskets.