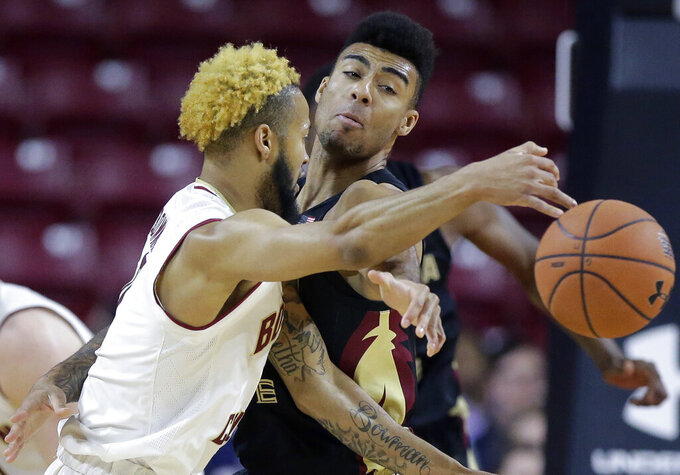 BOSTON (AP) — Ky Bowman scored 37 points and Jordan Chatman gave Boston College the lead for good by hitting three straight 3-pointers during a 21-4 run to start the second half, and the Eagles held on to beat No. 11 Florida State 87-82 on Sunday.

The Seminoles (13-5, 1-4 Atlantic Coast Conference) lost their third straight game in a week since climbing to the cusp of The Associated Press Top 10.

BC (10-7, 1-4) led by nine with 87 seconds left before a pair of turnovers against the full-court press allowed Florida State to make it a four-point game. But Wynston Tabbs made a 3-pointer with 24 seconds remaining to turn back the rally and snap the Eagles' five-game losing streak.

Chatman, who went 0 for 5 from the field in the first half, scored 15 of his 17 points in the second — making all five 3-pointers he attempted after the break.

With a snowstorm that dropped up to 7 inches on the area over Saturday night and into the morning, a sparse crowd at the Conte Forum came to life only in the second half, when Chatman hit three straight from beyond the arc to give the Eagles a 57-50 lead they never relinquished.

Bowman scored 18 points and grabbed five rebounds in the first half, when BC opened a 19-13 lead before the Seminoles scored eight straight points in 70 seconds to go in front. After Bowman gave the Eagles a 24-23 edge, Florida State scored 12 in a row and 17 of the next 18 points.

The Seminoles took a 46-36 lead into the break but missed their first five shots of the second, and BC cut the deficit to four points.

Florida State: A last-second defeat to top-ranked Duke was understandable, but the Seminoles may drop out of the Top 25 entirely after losses to Pittsburgh and Boston College. It does get a little easier: They leave the state of Florida only once in the next four weeks after traveling to Virginia, Pitt and BC this month.

Boston College: The Eagles have shown they can beat ranked teams — especially at home. They head to Wake Forest before games against Syracuse, Notre Dame and Syracuse again, so they may have to savor this for a while.