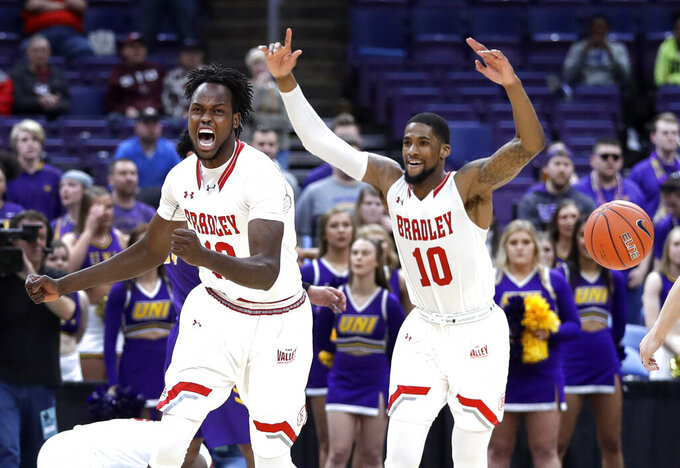 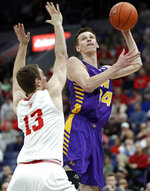 ST. LOUIS (AP) — A huge rally by Bradley resulted in quite a reward — its first trip to the NCAA Tournament since 2006.

Down by 18 points with 17 minutes left, Elijah Childs and the Braves surged past Northern Iowa 57-54 Sunday in the Missouri Valley Conference championship game.

"You can't make this up," Childs said. "We rode the wave and did the course."

The Braves advanced to the NCAA Tournament for the ninth time overall — in their last appearance, as a 13th seed, they beat Kansas and Pittsburgh before losing to Memphis.

Bradley trailed 35-17 before breaking loose. The Braves used a 12-0 run to get close.

Luqman Lundy had 11 points and eight rebounds as Bradley won the MVC Tournament title for the first time since 1988.

"I knew we would make plays eventually," Lundy said.

Added Childs, "We kept our composure, stayed aggressive. If they let us get those same shots we knew they'd fall."

The Panthers took a 48-41 lead on Green's jumper with just over six minutes left. Bradley closed the game on a 16-6 run over the final 5:58.

Childs started the comeback with a short jumper. Lautier-Ogunleye brought the Braves to within 49-48 with a 3-pointer. He then put his team in front to stay with four successive free throws after a dead ball foul against Luke McDonnell led to a four-point play.

Northern Iowa had a chance to go in front, but Green missed a jumper with five seconds left. Lautier-Ogunleye made two foul shots three seconds later.

(This) was kind of our year summed up in one game," Bradley coach Brian Wardle said. "Staying together, persevering, holding each other accountable, This was a player-led team, not a coach-led team."

Bradley had separate stretches of nearly nine minutes and more than six minutes where it didn't score in the first half, then hit 15 of 26 shots after the break.

Bradley claimed its third MVC crown to go with titles in 1980 and 1988. The Braves hit the 20-win mark for the 27th time in school history and second in a row.

Northern Iowa was well on the way to its ninth NCAA Tournament appearance when it took a 38-28 lead midway through the final half.

"Their offense was just better than our defense in that four, five-minute stretch," Northern Iowa coach Ben Jacobson said. "They had some guys hit some big shots."

Explained Green, "The first half was great, we were playing hard, defending. (But) it takes the whole 40 minutes in order to come away with the win."

Northern Iowa went 8 of 20 from 3-point range and has made at least one 3-pointer in 628 successive games, the longest streak among MVC teams.

Bradley: The Braves, from Peoria, Illinois, are headed to the NCAA Tournament after winning nine of their last 11 games.

Northern Iowa: The Panthers lost three of their last five, including their final two regular-season games.