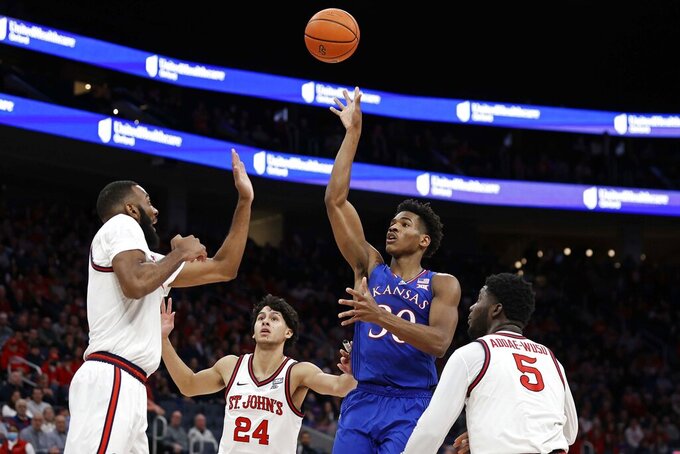 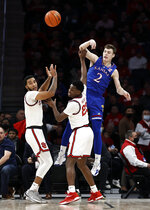 Christian Braun had a career-high 31 points, Ochai Agbaji scored 23 and the No. 8 Jayhawks emphatically turned back a second-half charge to beat St. John's 95-75 on Friday night in the first basketball game at UBS Arena.

Senior forward David McCormack, off to a slow start this season, was a force inside with 15 points and 13 rebounds for the Jayhawks (6-1), who have bounced back from a one-point loss to Dayton last week with consecutive double-digit wins.

“It's really important," Agbaji said. "These preseason games mean a lot. Kind of practicing for conference road games, and when we have rough stretches like that. You know, winning on the road and responding to big crowds like this."

It was Kansas' second victory in New York this season after opening with an 87-74 win over Michigan State on Nov. 9 in the Champions Classic at venerable Madison Square Garden.

Remy Martin added 12 points and five assists, and the Jayhawks clamped down on defense in the final 10 minutes of a game that was part of the annual Big East-Big 12 Battle.

Julian Champagnie scored all but four of his 24 points after halftime for the Red Storm (5-2), who were facing their first ranked opponent this season in a matchup of programs rich in history that met for the 1952 NCAA title.

“We just know we’re not there yet,” coach Mike Anderson said.

Posh Alexander and Dylan Addae-Wusu each scored 16 for St. John's, which was playing less than 8 miles from campus before a crowd of 9,769.

Kansas traveled about 1,270 miles — and has more wins in the glimmering new arena than the NHL team it houses.

Depleted by COVID-19 absences, the New York Islanders are 0-4-1 in their $1.1 billion home that opened two weeks ago at Belmont Park.

“It's a great venue,” Jayhawks coach Bill Self said, smiling. “And one thing I do like, you know, we're from the Midwest, we think our fans can get rowdy. But fans up here can probably be a little more pointed with some personal comments. So I thought that was actually fun to be around that, too.”

Self and players on both teams mentioned how slick the floor was, though, with the hardwood sitting above the ice.

“I'm sure that'll be corrected,” Self said.

Champagnie said it was the reason he changed sneakers.

“The building was cool. It reminded me a lot of The Garden, just without the same history,” he said.

Champagnie drained his first five 3-point attempts in the second half as St. John's whittled a 13-point halftime deficit to three on two occasions.

But then Agbaji responded with a 3 and a putback, and Kansas used an 11-0 spurt to take command for good.

“We went through one of those moments that we talk about that we can’t have,” Champagnie said. “One of those dull moments.”

Kansas: The loss to Dayton on a buzzer-beater in Florida last week dropped the Jayhawks four spots in the AP poll, but they rebounded with a 96-83 win over Iona on Sunday in Orlando. Self is still toying with a deep rotation and demanding better defense. Kansas has used at least 11 players in all seven games.

St. John's: With a deep roster featuring two stars back from last season's surprising 16-11 squad in Champagnie and Alexander, the Red Storm have legitimate NCAA Tournament aspirations after getting picked fourth in the Big East coaches' poll. But they're still melding five accomplished Division I transfers with three returnees, and have barely squeezed by at home lately against some of the weak competition that makes up a soft nonconference schedule. St. John's lost by two at Indiana last month and this was probably its only other opportunity for a significant resume boost outside the Big East.

Alexander appeared to be hobbled at times by the lower right leg injury that caused him to miss a game on Nov. 23.

“He said it was cramps,” Anderson said. “We'll monitor that.”

Braun shot 10 of 16 from the field and 9 for 10 from the free throw line. He had eight rebounds, four assists and three steals. “He’s climbing up some draft boards,” Self said. ... Kansas led for 38:40 and dominated down low. The Jayhawks outrebounded the Red Storm 47-29, outscored them 48-24 in the paint and compiled a 24-6 advantage in second-chance points. ... Agbaji went 5 for 9 from 3-point range and grabbed seven boards. ... Anderson and Alexander, who bumped into an official, were whistled for successive technical fouls on one sequence late in the game. Braun made all four free throws.

Kansas assistant Norm Roberts was the head coach at St. John's from 2004-10, going 81-101 in six seasons without an NCAA Tournament berth. ... The only appearance for St. John's in the national championship game was an 80-63 loss to Clyde Lovellette and Kansas in 1952 as Phog Allen coached the Jayhawks to their first of three NCAA titles. ... Kansas redshirt Kyle Cuffe Jr., a freshman guard from Harlem in New York City, is the son of the former St. John's power forward. Kyle Cuffe Sr. played for the Johnnies from 2000-04 and averaged 11.2 points and 7.2 rebounds as a senior. “Definitely supporting my son and Kansas but I bleed red storm,” he posted Thursday on Twitter. ... St. John's freshman O’Mar Stanley is from Overland Park, Kansas. ... Kansas leads the all-time series 9-5. It was the first meeting between the schools since November 2000 at Madison Square Garden. Kansas has the second-most wins among major college basketball programs, while St. John's ranks ninth.

Kansas: Will host UTEP on Tuesday night in Kansas City, Missouri, before renewing an old border rivalry with Missouri on Dec. 11 at Allen Fieldhouse.

St. John's: Back on campus Sunday night to face New York City foe Fordham in the 89th meeting of a series that dates to 1909. St. John's is 18-0 against the Rams at Carnesecca Arena/Alumni Hall.