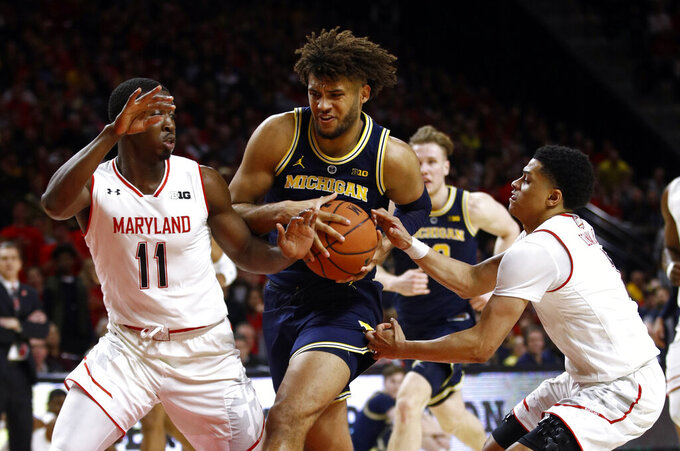 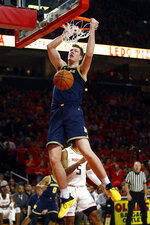 COLLEGE PARK, Md. (AP) — Playing with intensity and emotion after being cut down to size in defeat, Michigan used a strong performance from its relentless starting lineup to remain in the hunt for the Big Ten title.

Ignas Brazdeikis scored 21 points, Jon Teske had 11 points and 10 rebounds, and No. 9 Michigan pulled away from 17th-ranked Maryland in a 69-62 victory Sunday.

The Wolverines (26-4, 15-4) clinched a double-bye in the conference tournament and still have chance to overtake first-place Purdue. Michigan, the defending Big Ten Tournament champion, must win its finale at Michigan State and hope the Boilermakers lose at least one of their last two.

"The regular-season championship is a prize for most programs that have any history in this (conference)," coach John Beilein said. "That's the prize. Michigan, we haven't won it that many times."

After losing at Penn State on Feb. 12 and at home against Michigan State a week earlier, the Wolverines found their roots with a big win at Maryland.

"This was as focused as we've been," Beilein said. "We've only lost four games, but we've had some times this year that we really got pruned. And being a farm boy, when you get pruned you grow back stronger."

Michigan trailed 43-41 before Isaiah Livers hit a 3-pointer, Zavier Simpson popped a jumper and Jordan Poole made a layup during a five-minute span in which the Terrapins struggled offensively.

A 3-pointer by Brazdeikis made it 51-45, and Simpson added a desperation running hook in the final seconds of the shot clock for an eight-point lead with 4:38 left.

"We were just super locked in," Brazdeikis said. "We were ready. We did a great job preparing for this game."

Freshman Jalen Smith scored 11 and three others chipped in with 10, including leading scorer Anthony Cowan, who went 4 for 15 from the floor and missed his first five attempts from beyond the arc before finally connecting with 1:26 remaining.

"The guys that we count on offensively just didn't play particularly well tonight, but give (the Wolverines) credit. They were great defensively," coach Mark Turgeon said.

Simpson had 12 points and 10 assists, and Poole scored 12 for Michigan. The Wolverines were without senior guard Charles Matthews, who missed a second straight game with a sprained right ankle. He ranks third on the team in scoring at 12.8 points per game.

The starters picked up the slack. All five played at least 32 minutes and accounted for all but two of Michigan's points.

Notorious for its slow starts this season, Maryland bolted to a 6-0 lead and held a 22-16 advantage before the Wolverines went on a 12-2 run over the final seven minutes of the first half.

In the duel between the centers, Teske had eight points and seven rebounds before halftime and Fernando scored six points, all on dunks .

The Wolverines went up 35-30 before Smith made three straight baskets to put Maryland back in front.

Michigan: This was a big win for the Wolverines. Having secured a double-bye to start the Big Ten Tournament, the Wolverines are looking to enter as the No. 1 seed.

"I would assume there's two, three, maybe there's four still in that hunt," Beilein said. "And getting the championship by yourself is even bigger."

Maryland: The Terps are heading in reverse after losing at Penn State on Wednesday before dropping their first conference game at home. They've got one game left to right the ship.

"I think we got better today," Turgeon said. "I know it sounds crazy, but we got some really good looks against a long, athletic, fast, bouncy team."

Maryland fans chanted "You are ugly!" during Brazdeikis' first trip to the foul line. After he made both shots, the public address announcer told the crowd that Turgeon requested that the chant not be repeated.

"I love crowds like that. It motivates me," Brazdeikis said. "It makes me more hungry. I embrace that, every second of it. As much as they think they're getting in my head, that's actually fuel for me."

On Brazdeikis' next trip to the line, the students merely booed.

Michigan: Concludes its regular season at Michigan State on Saturday for a rematch of a game won by the Spartans 77-70 on Feb. 24.

Maryland: Hosts Minnesota on Friday night in its season finale. The Terps beat the Golden Gophers 82-67 on Jan. 8.