Brazdeikis scores 23 to lead No. 17 Michigan over Rutgers 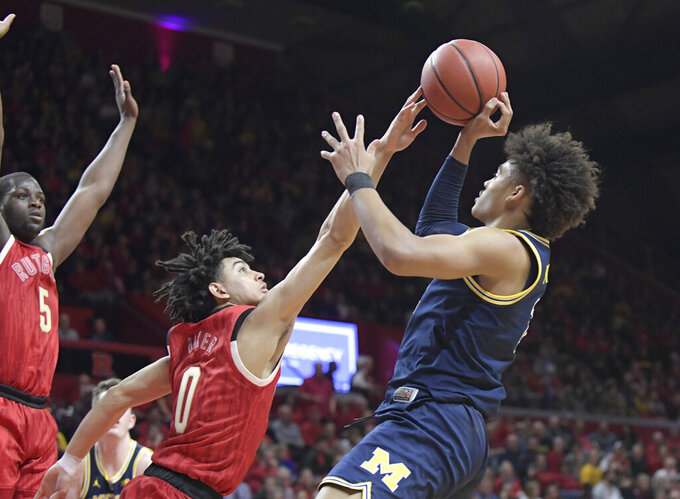 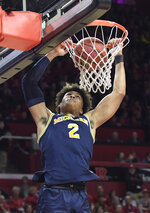 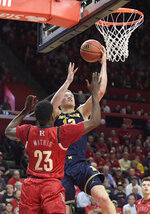 PISCATAWAY, N.J. (AP) — Coming off their worst game of the season, No. 7 Michigan did almost everything right to give coach John Beilein a school record-setting win on his 66th birthday.

"We were really good today," Beilein said. "I really loved just about everything about our game except that 14-second span where we lost our minds and they scored eight points."

The eight-point run allowed Rutgers (11-11, 4-8) to cut into an early 17-point lead but it never got closer than seven points the rest of the way.

Beilein referred to the win on his birthday as boring, and added he would cherish it for 10 minutes before looking at statistics for this weekend's game against No. 19 Wisconsin.

"It's a sickness that I can't get away from, but that's what it is," he said. "I am trying to realize that I am not going to coach forever and these are great wins, these road wins. For us to have four road wins already in this conference is a great accomplishment."

There were a lot of contributors.

Zavier Simpson added 14 points, seven assists and seven rebounds as the Wolverines bounced back from a dreadful performance in a 74-59 loss to Iowa. Jordan Poole added 15 points and Charles Matthews had 11 in giving Beilein his 121st win in the conference for Michigan, a school record. He share the old record with Johnny Orr.

Eugene Omoruyi, who spent a year in high school with Brazdekis in Ontario, Canada, had 21 to lead Rutgers. Montez Mathis added 12 points.

Brazdeikis finished 8 of 14 from the field, including 5 of 9 from 3-point range. His point total was one off his career-high of 24 against North Carolina.

For much of the night he was paired head to head with Omoruyi, who was his roommate in his first year at prep school.

GOOD DEFENSE: Michigan held Rutgers guard Gio Baker to eight points on 1 of 9 shooting. He was averaging 13.2 points. Beilein said he mentioned Baker's name about 100 times in the two practices leading up to the game.

Michigan: The Wolverines did not get caught looking past Rutgers to Wisconsin this weekend. The Badgers beat the Wolverines 64-54 on Jan. 19 to hand them their first loss after a 17-0 start.

Rutgers: The Scarlet Knights are relentless. Despite being down early, they kept coming back and forced Beilein to play his starters until the final minute. Their four conference wins are two less than Pikiell had combined in his first two seasons here.

Michigan: Return home to face No. 19 Wisconsin on Saturday afternoon.

Rutgers: At Illinois on Saturday afternoon in their only meeting this season.