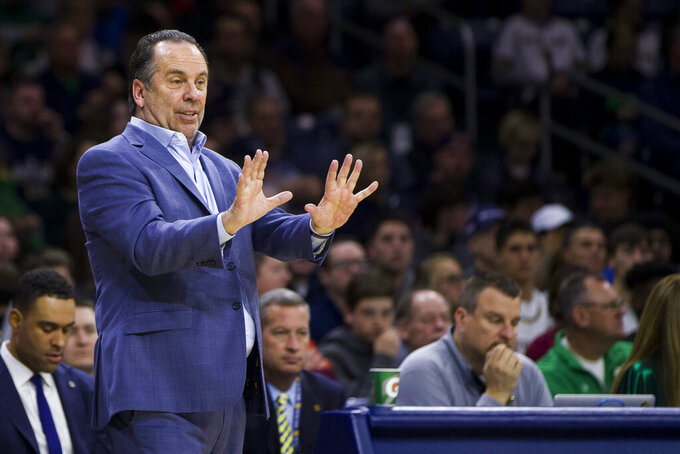 File-This March 7, 2020, file photo shows Notre Dame head coach Mike Brey during an NCAA college basketball game against Virginia Tech in South Bend, Ind. Brey doesn’t know what to expect from playing a full season in the midst of the COVID-19 pandemic, but he figures his Notre Dame men’s basketball team might as well have fun playing it. (AP Photo/Robert Franklin, File)

SOUTH BEND, Ind. (AP) — Mike Brey doesn’t know what to expect from playing a season in the midst of a pandemic, but he figures Notre Dame might as well have fun playing it.

A 9-4 finish to last year’s 20-12 campaign ended early by the coronavirus has Brey and his 12 players brimming with optimism. Most league observers feel the Fighting Irish will struggle to finish in the middle of the pack in Brey’s 21st season.

“We wouldn’t have scheduled like this unless you saw at the end of last year … the light bulb go on for some of our younger players, especially our junior class,” said Brey about a nonconference slate that includes No. 10 Kentucky, No. 12 Tennessee and No. 13 Michigan State.

The 6-foot-3 Hubb averaged 12.1 points and 5.1 assists in his 32 starts. He will share the basketball in the backcourt with the 6-5 Ryan, who averaged 8.7 points and hit 49 3-pointers in his only season with the Cardinal.

“There are two loud voices,” Brey said. “It’s Prentiss Hubb’s team, but Cormac Ryan is a great voice. I’m really excited about them helping me run this group.”

Brey believes the weight-room work of Laszewski and Durham will help the Irish make up some of the 12.7 rebounds averaged last season by Mooney, who scored 16.2 points a game and now plays professionally in Australia. Durham (7.8 points, 4.6 rebounds) now carries 240 pounds on his 6-11 frame, while the 6-10 Laszewski (7.4 points, 4.6 rebounds) is at 230.

The 243-pound Zona has impressed Brey with his physical play.

“He’s got a little of that New York crazy in him and I mean that as a compliment,” Brey said. “How can you not be a tough dude if you dad is a New York City firefighter?”

Junior guard Trey Wertz, a 6-5 transfer from Santa Clara where he averaged 9.2 points a game for two years, is scheduled to sit out the season. Notre Dame is petitioning the NCAA for immediate eligibility.

“We came up with a proposal that this should be an all-hands-on-deck season to get through it,” Brey said. “I don’t know why anyone on my roster would be ineligible in a COVID season. I’m going to need all of our guys eligible to get through these next five months.”

The Irish open Nov. 28 at Michigan State. Tennessee visits Dec. 4 and No. 23 Ohio State visits four days later in the ACC/Big Ten Challenge. Following a Dec. 12 trip to Kentucky, the Irish open their ACC season at home against No. 9 Duke and close out 2020 with a visit from No. 4 Virginia.

“My feeling was to really go for it and schedule big, exciting games for our kids because I don’t know what is going to happen the rest of the winter after the first of the year,” said Brey, whose team has been practicing in masks.

ACC media members picked Virginia to win the league. The Irish were picked 12th. Nevertheless, Brey feels an NCAA bid isn’t out of the question for the Irish, who last played in the tournament during a 26-10 campaign in 2016-17.

“I remind our players of that,” Brey said of the outside pessimism. “There’s a little bit of an edge to prove themselves.”