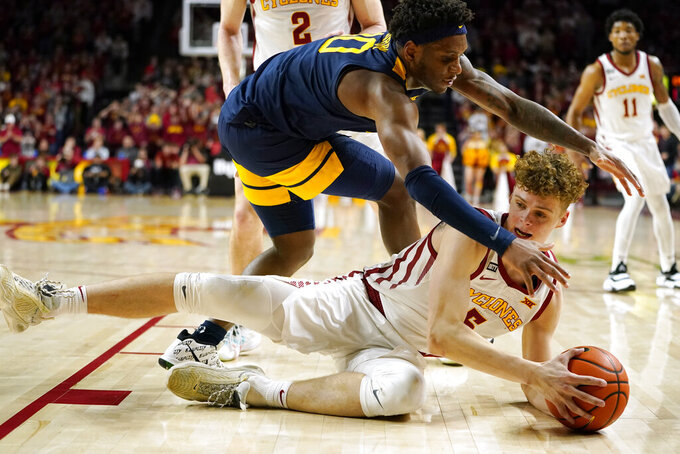 AMES, Iowa (AP) — Izaiah Brockington stole an inbounds pass underneath the Iowa State basket and scored with 22.6 seconds left to give the Cyclones the lead en route to an 84-81 comeback victory over West Virginia on Wednesday night.

Iowa State trailed by 12 points with more than 14 minutes left, but Brockington put the team on his back, scoring 19 of his career-high 35 points in the final 9:40 to bring the Cyclones back.

Brockington scored six straight points, including a dunk to take the lead at 60-58 with 8:23 left. Later, Brockington missed an open jumper, snared the rebound and drove into the lane and drew a foul with 28 seconds left, but missed the first free throw before making the second to cut the West Virginia lead to 81-80. The Cyclones defended the inbounds pass and forced the Mountaineers to take a timeout, and on the following inbounds play, Brockington got a hand on the ball, picked it up and scored to take the lead at 82-81.

Malik Curry drove the lane, but his short jumper with 15 seconds left went hard off the iron and the Mountaineers missed three tip-in attempts before Gabe Kalscheur got the rebound for Iowa State, was fouled and made two free throws to set the final score.

Brockington hit 14 of 22 shots from the field, including 5 of 8 from beyond the arc to give Iowa State (19-9, 6-9 Big 12) its third straight win since snapping a four-game losing streak. Kalscheur added 19 points and Tyrese Hunter contributed 10 points and grabbed nine rebounds.